Editorial: Gun Control for Whom?

The rise in racist militarized police shooting sunarmed Black people, racists shooting demonstraters protesting police brutality, armed racist storming the capital, and mass shootings, the liberal wing of the United States ruling class have been agitating for gun control.  The real goal is prevent organized slef-defense.  For example: New York State has/had strict gun control restrictions. The crooks had no problem getting guns, but when Malcolm X and his supporters tried to get a gun permits, they were denied.

What gun control is intended to prevent is organized armed self-defense of the working class, Blacks, and oppressed sectors of society! With all the liberal  gun control agitation, here are a few examples of armed self defense that was part of the success of the 60’s civil rights movement’

The Deacons for Defense and Justice 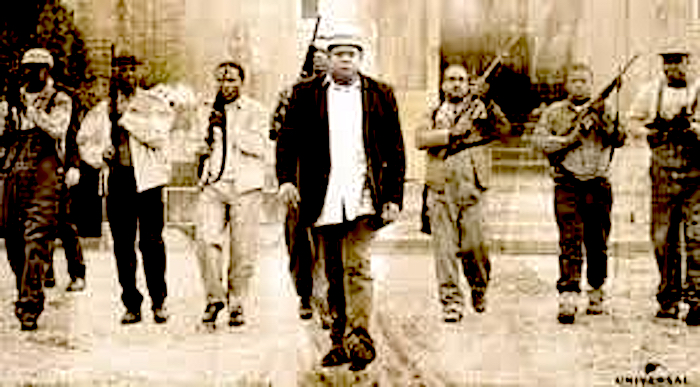 The Lessons of the Montgomery Bus Boycott By Roland Sheppard:Why the Boycott Was Successful!

However, righteous self-defense, became a call of the Deacons for Defense and Justice, during this time: The Deacons for Defense and Justice was an armed self-defense African-American civil rights organization in the U.S. Southern states during the 1960s. Historically, the organization practiced self-defense methods in the face of racist oppression that was carried out under the Jim Crow Laws by local/state government officials and racist vigilantes. Many times the Deacons are not written about or cited when speaking of the Civil Rights Movement because their agenda of self-defense – in this case, using violence, if necessary – did not fit the image of strict non-violence that leaders such as Dr. Martin Luther King Jr. espoused. Yet, there has been a recent debate over the crucial role the Deacons and other lesser known militant organizations played on local levels throughout much of the rural South. Many times in these areas the Federal government did not always have complete control over to enforce such laws like the Civil Rights Act of 1964 or Voting Rights Act of 1965.      The Deacons were instrumental in many campaigns led by the Civil Rights Movement. A good example is the June 1966 March Against Fear, which went from Memphis, Tennessee, to Jackson, Mississippi. The March Against Fear signified a shift in character and power in the southern civil rights movement and was an event in which the Deacons participated. . .Scholar Akinyele O. Umoja speaks about the group’s effort more specifically. According to Umoja it was the urging of Stokely Carmichael that the Deacons were to be used as security for the march.      Many times protection from the federal or state government was either inadequate or not given, even while knowing that groups like the Klan would commit violent acts against civil rights workers. An example of this was the Freedom Ride where many non-violent activists became the targets of assault for angry White mobs. After some debate and discussion many of the civil rights leaders compromised their strict non-violent beliefs and allowed the Deacons to be used. One such person was Dr. King. Umoja states, “Finally, though expressing reservations, King conceded to Carmichael’s proposals to maintain unity in the march and the movement. The involvement and association of the Deacons with the march signified a shift in the civil rights movement, which had been popularly projected as a ‘nonviolent movement.”‘[7]— Wilkipedia — The Rise and Fall of the Civil Rights Movement By Roland Sheppard

The Black Panther Party The Black Panther Party for Self-Defense (BPP) was founded in October 1966 in Oakland, California by Huey P. Newton and Bobby Seale, who met at Merritt College in Oakland. It was a revolutionary organization with an ideology of Black nationalism, socialism, and armed self-defense, particularly against police brutality. It was part of the Black Power movement, which broke from the integrationist goals and nonviolent protest tactics of the Southern Christian Leadership Conference led by Dr. Martin Luther King, Jr. The BPP name was inspired by the use of the black panther as a symbol that had recently been used by the Lowndes County Freedom Organization, an independent Black political party in Alabama.  The BPP’s philosophy was influenced by the speeches of Malcolm X of the Nation of Islam, the teachings of Chairman Mao Tse-Tung of the Communist Party of China, and the anti-colonialist book The Wretched of the Earth (Les Damnés de la Terre, 1961) by the Martiniquan psychiatrist Frantz Fanon. The BPP’s practice of armed self-defense was influenced by African American activist Robert Williams, who advocated this practice against anti-black aggression by the Ku Klux Klan in his book Negroes with Guns (1962). Newton and Seale canvassed their community asking residents about issues of concern. They compiled the responses and created the Ten Point Platform and Program that served as the foundation of the Black Panther Party. The ten points are:

Because of its practice of armed self-defense against police, as well as its Communistic and revolutionary elements, the BPP was frequently targeted by the Federal Bureau of Investigation’s COINTELPRO program as well as by state and local law enforcement groups. However, despite its militant stance, the BPP also provided free breakfast for school children, sickle cell anemia screening, legal aid, and adult education.     The National Archives and Records Administration contains over 2,400 records relating to the Black Panther Party. Most of these records are textual records, but there are also motion pictures, sound recordings, and photographs.

Armed Black Panthers in the Capitol, 50 Years On  It’s largely forgotten now, but 50 years ago, it created a national sensation. It even caused the National Rifle Association and Ronald Reagan to back a gun-control bill authored by a Republican. Tuesday is the 50th anniversary of the May 2, 1967 “invasion” of the state Capitol by two dozen gun-toting Black Panthers. Carrying rifles, pistols and shotguns, and wearing dark glasses, leather jackets and berets, they marched up the front steps and into the Capitol to demonstrate their opposition to an anti-gun bill by Oakland Republican Don Mulford (1915-2000).