Human Society Stands At The Crossroads:Either Socialism Or The Destruction of Humanity 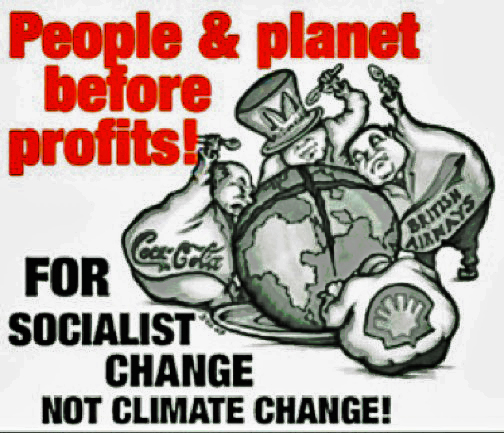 Global warming isn’t a prediction. It is happening. That is why I was so troubled to read a recent interview with President Obama in Rolling Stone in which he said that Canada would exploit the oil in its vast tar sands reserves “regardless of what we do.” If Canada proceeds, and we do nothing, it will be game over for the climate. — James Hansen, Director NASA Goddard Institute for Space Studies,  Game Over for the Climate

Friedrich Engels once said: “Bourgeois society stands at the crossroads, either transition to socialism or regression into barbarism.” What does “regression into barbarism” mean to our lofty European civilization? Until now, we have all probably read and repeated these words thoughtlessly, without suspecting their fearsome seriousness. A look around us at this moment shows what the regression of bourgeois society into barbarism means. This world war is a regression into barbarism. The triumph of imperialism leads to the annihilation of civilization. At first, this happens sporadically for the duration of a modern war, but then when the period of unlimited wars begins it progresses toward its inevitable consequences. Today, we face the choice exactly as Friedrich Engels foresaw it a generation ago: either the triumph of imperialism and the collapse of all civilization as in ancient Rome, depopulation, desolation, degeneration – a great cemetery. Or the victory of socialism, that means the conscious active struggle of the international proletariat against imperialism and its method of war. This is a dilemma of world history, an either/or; the scales are wavering before the decision of the class-conscious proletariat. The future of civilization and humanity depends on whether or not the proletariat resolves manfully to throw its revolutionary broadsword into the scales. In this war imperialism has won. Its bloody sword of genocide has brutally tilted the scale toward the abyss of misery. The only compensation for all the misery and all the shame would be if we learn from the war how the proletariat can seize mastery of its own destiny and escape the role of the lackey to the ruling classes.” — Rasa Luxemburg, Chapter I, The Junius Pamphlet

Today a new factor has been added. Production for profit has lead the destruction of the habitat for humanity through global warming, nuclear radiation, perpetual wars, pestilence, starvation, and thirst.

Fidel Castro expressed the urgency of these problems in his speech to the Earth Summit in Rio De Janeiro in 1992. He opened with these words:

An important biological species is in danger of disappearing due to the fast and progressive destruction of its natural living conditions: mankind. We have now become aware of this problem when it is almost too late to stop it.

It is necessary to point out that consumer societies are fundamentally responsible for the brutal destruction of the environment. They arose from the old colonial powers and from imperialist policies which in turn engendered the backwardness and poverty, which today afflicts the vast majority of mankind.

With only 20 percent of the world’s population, these societies consume two-thirds of the metals and three-fourths of the energy produced in the world. They have poisoned the seas and rivers, polluted the air, weakened and punctured the ozone layer, saturated the atmosphere with gases which are changing weather conditions with a catastrophic effect we are already beginning to experience.

The forests are disappearing. The deserts are expanding.  Every year thousands of millions of tons of fertile soil end up in the sea. Numerous species are becoming extinct. Population pressures and poverty trigger frenzied efforts to survive even when it is at the expense of the environment. It is not possible to blame the Third World countries for this. Yesterday, they were colonies; today, they are nations exploited and pillaged by an unjust international economic order. The solution cannot be to prevent the development of those who need it most. The reality is that anything that nowadays contributes to underdevelopment and poverty constitutes a flagrant violation of ecology. Tens of millions of men, women, and children die every year in the Third World as a result of this, more than in each of the two world wars.

Unequal terms of trade, protectionism, and the foreign debt assault the ecology and promote the destruction of the environment. If we want to save mankind from this self-destruction, we have to better distribute the wealth and technologies available in the world. Less luxury and less waste by a few countries is needed so there is less poverty and less hunger on a large part of the Earth. We do not need any more transferring to the Third World of lifestyles and consumption habits that ruin the environment. Let human life become more rational. Let us implement a just international economic order. Let us use all the science necessary for pollution-free, sustained development. Let us pay the ecological debt, and not the foreign debt. Let hunger disappear, and not mankind.

Now that the alleged threat of communism has disappeared and there are no longer any more excuses for cold wars, arms races, and military spending, what is blocking the immediate use of these resources to promote the development of the Third World and fight the threat of the ecological destruction of the planet? Let selfishness end. Let hegemonies end. Let insensitivity, irresponsibility, and deceit end. Tomorrow it will be too late to do what we should have done a long time ago.”

Capitalism will not change its inhuman drive for profits at the expense of our existence as a species.

Scientific technology exists to prevent the coming catastrophe, but the profit motive and capitalist competition prevent the implementation of preventive action and proper safety precautions.

Science and technology are not an obstacle to maintaining a safe environment. The barrier to a safe environment is capitalism and its paramount principle of production and science for profit. Most environmental studies demonstrate that environmental destruction has become globally intertwined within our society and that the globalization of capitalism has quickened the destruction of the planet. Under the conditions of global capitalist competition, it is not economically feasible to invest the capital necessary to reverse this destruction.

In the present world, the rights of the capitalists to make a profit are in direct conflict with our basic rights. In this sense, the capitalist system has become a threat to humanity.

Jefferson’s words, from the Declaration of Independence, that human rights are unalienable, mean that these rights can never be superseded. At all points of conflict the rights of humanity to survive must supersede the right of the few to make a profit. The right to a safe environment is an unalienable human right!

Since environmental illness and destruction are a global concern, it requires all of humanity to act collectively, in our overall interests for our survival as a species, to correct the problem and to remove the obstacle of capitalism. It requires a society where humanity has social, economic, and political control over the entire environment. Such a society, a socialist society, is needed to ensure that all decisions affecting the environment are under the democratic control of humankind so that the production of goods will be done for the needs and survival of humanity instead of the production and the destruction of humanity and other species for profit.

With these goals we can begin to build a more effective environmental movement. As we continue to organize against capitalism and its destructive course, we can and will transform the world.

In the words of Margaret Mead, the famous anthropologist: Never doubt that a “small group of thoughtful, committed citizens can change the world. Indeed, it is the only thing that ever has.”

The time to begin is now! Occupy Wall Street and the Quebec Student strike are examples of new beginning for humanity.