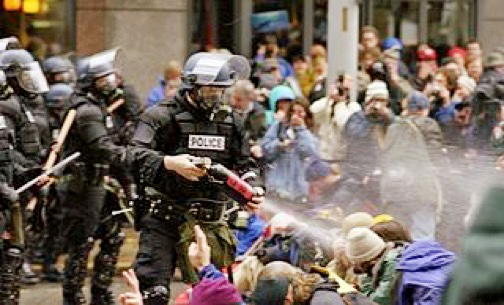 As I write this article, the demonstrations against the global crimes of capitalism are taking place in Seattle. One thing is clear as we approach a new millennium-the future of humanity is in doubt.

Even the best estimates project that the catastrophic effects of global warming will occur within 50 years. Fifty years till the ice caps melt and the rise in sea level destroys most cities and most of the industrial infrastructure.

The current increasing rate of worldwide pollution of the land, sea, and the air is another threat to humanity’s future.

War has been a constant aspect of capitalist society. AIDS is still a worldwide epidemic, and starvation is found throughout the world. Capitalism has gone throughout the world like the four horsemen of the apocalypse bringing war, famine, pestilence, and death.

In the industrialized countries, laws have been won to regulate some of the abuses of capitalism in its natural drive for profits. For example, in the United States, child labor was finally stopped after the rise of the CIO in the 1930s and the civil rights movement in the ’60s. That has not stopped the newly “moral” United States corporations from using children for profit anywhere else in the world or paying a living wage to the world’s workers and farmers.

The basic argument for “natural capitalism” is that it will have to become humane or it will no longer exist. The problem is that capitalism always is unnatural and inhumane.

Capitalism came into existence on an inhumane basis. Karl Marx wrote about the “genesis of the industrial capitalist” in “Capital,” Volume One, Part VIII, Chapter 31:

….The discovery of gold and silver in America, the extirpation, enslavement, and entombment in mines of the aboriginal population, the beginning of the conquest and looting of the East Indies, the turning of Africa into a warren for the commercial hunting of black-skins, signalized the rosy dawn of the era of capitalist production. If money … comes into the world with a congenital blood-stain on one cheek, capital comes dripping from head to foot, from every pore, with blood and dirt. . . .

Simply put, a leopard does not change its spots. Environmental destruction has become globally intertwined within our society, and the globalization of capitalism has speeded up the destruction of the planet. Under the conditions of global capitalist competition, it is not economically “feasible” to invest the capital necessary to reverse this destruction.

In the present world, the rights of the capitalists to make a profit are in direct conflict with our basic rights. In this sense, the capitalist system has become a threat to humanity.

Since environmental illness and destruction are a global concern, it requires all of humanity to act collectively, in our overall interests for our survival as a species, to correct the problem and to remove the obstacle of capitalism. It requires a society where humanity has social, economic, and political control over the entire environment.

Such a society, a socialist society, is needed to ensure that all decisions affecting the environment are under the democratic control of humankind so that the production of goods will be done for the needs and survival of humanity instead of the production and the destruction of humanity and other species for profit. With common ownership of the means of production, common control, and common protection of all property and wealth, science and society will be in harmony with the ecosystem and humanity’s future.