The Poisoning of Children & The Arrogance of Wealth 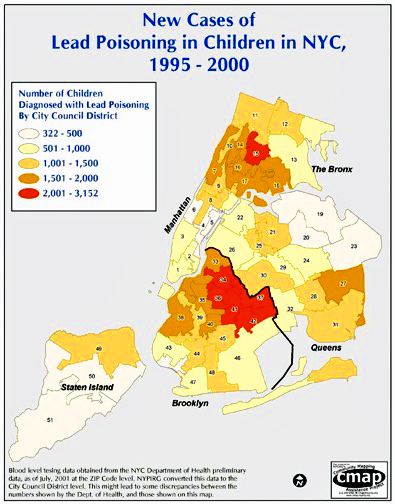 A new book, “Work, Health, and Environment: Old Problems, New Solutions,” edited by Charles Levenstein and John Wooding, points out that “lead toxicity is a significant problem not only in the workplace. It is also one of the most prevalent diseases of environmental origin in the United States today.”

The book notes (page 141) that “using a blood lead criterion of 15 ug/dl as an index of increased lead absorption, a value currently under review by the Center for Disease Control, more than 67 percent of Black inner-city children and nearly 17 percent of all children under the age of five in the United States-a total of 2.3 million children-have excessive internal exposures to lead.”

This is a real concern when one realizes that a blood lead level of 10 ug/dl is sufficient to cause permanent brain damage-behavior problems, learning disabilities, etc.-in children under seven. When you add in that hypertension is a leading cause of death among Black adults, it is clear that something must be done.

. . . Many adults also have elevated body lead burdens as a result of general environmental exposures that put them at increased risk for neurotoxicity, renal toxicity, and hypertensive heart disease. Occupational exposures represent an additional burden over and above this background for that segment of the population working with lead. EPA’s Toxics Release Inventory confirms that industry remains a significant source of lead releases into the environment. For instance, in 1987, more than 33 million pounds of lead and lead compounds were released in land disposal sites. Primary and secondary lead smelters in the United States currently emit more than 17 million tons of lead per year into the environment. “Reducing exposures to lead in the occupational setting will, if properly implemented, have the additional benefit of reducing releases of lead into the general environment. . . .

The lead pigment industry has known about the hazards of lead since the turn of the century. Most governments outlawed lead paint at that time. But the U.S. government waited until 1978. The profits of the lead manufacturers had more priority for the government than the health of children!

In the Aug. 22, 1999, issue of The New York Times, there appeared an article, “States Criticized on Lax Lead Tests for Poor Youths,” by Robert Pear. The article states:

“WASHINGTON-Federal investigators say most states are flouting a 1989 law requiring that young children on Medicaid be tested for lead poisoning. As a result, they say, hundreds of thousands of children exposed to dangerously high levels of lead are neither tested nor treated.

“The General Accounting Office, an investigative arm of Congress, found that ‘few Medicaid children are screened for blood-lead levels,’ even though the problem of lead poisoning is concentrated among low-income children on Medicaid. Medicaid recipients are three times as likely as other children to have high amounts of lead in their blood.

. . . Separately, a federal advisory panel said this week that ‘current lead screening rates among children covered by Medicaid are very poor, despite federal requirements.’ Cost is not the main reason for the failure to test children, health officials say. The laboratory test usually costs less than $10. Officials cite more complex reasons for the low rates of testing. Many doctors do not see lead exposure as a problem for their patients and therefore do not believe tests are necessary, or they are unaware of the federal requirements. “In addition, many poor children do not go to the doctor until they are sick, and most children with high levels of lead in the blood display no obvious symptoms at first. . . .

The government has been concentrating its efforts on testing buildings-not children. For example, when I was a business agent for Painters District Council #8 in San Francisco, our union was invited by the Mayors Office of Housing to participate in their lead-prevention program. This program basically was designed to do the minimum type of lead abatement to make the building temporarily “lead safe.”

They called this program “abatement with a small A.” (A community person who was in the meeting said: “That’s like Murder with a small ‘m.'”)

Once the minimal abatement was accomplished, the responsibilities and liability to protect children from lead was shifted to the parent-eliminating the liability of the landlord and the lead paint companies.

The government, in the name of protecting children, is essentially defending the lead companies from liability, while it charges working people (through taxes) for the costs of removing or abating lead.

If I poisoned someone, I would be arrested and sent to prison for murder or attempted murder. The lead companies do not even get fined to pay for the clean-up of the poison.

In 1997, the Governing Council of the American Public Health Association (APHA) adopted a policy statement urging that lawsuits be brought by governments, individuals, and others who are seeking monetary compensation for the damages knowingly caused by the manufacturers of lead and products that contain lead.

Following the APHA policy statement, a battery of lawyers that were involved in the successful Delcon Shield, Fen Fen, and Tobacco class-action lawsuits have begun the process of organizing such litigation against the lead paint companies.

The purpose is to make them pay damages and be accountable for poisoning children, to pay for the removal of lead from the environment, and to pay for the care of those who have been poisoned. This is being done under the principle that the polluter should pay for the damage from pollution and the understanding that the government is protecting these companies.

The goal of safe environment can only be achieved if polluters are held accountable and severely punished.