Nuclear Power: What Have They Done to the Rain? 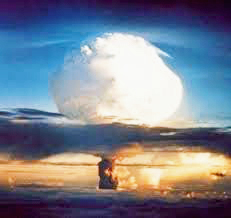 In the early 1960s, Joan Baez sang the following protest song  about ‘The gentle rain (nuclear fallout) that falls for years:’

Just a little rain, falling all around; The grass lifts its head to the heavenly sound.

Just a little boy, standing in the rain, The gentle rain that falls for years;

And the grass is gone, the boy disappears, The rain keeps falling like helpless tears;

And what have they done to the rain?  Just a little breeze, out of the sky;

The leaves pat their hands as the breeze blows by.  Just a little breeze with some smoke in its eye;

What have they done to the rain?  Just a little boy, standing in the rain,

The gentle rain that falls for years;  And the grass is gone, the boy disappears,

The rain keeps falling like helpless tears;  And what have they done to the rain?

What have they done to the rain?

In the 50’s, nuclear fallout from atom bomb testing was determined to be “Just a Gentle Rain,” non lethal to humans. Although recent government revelations show that, the government had a high priority to tell Kodak that nuclear fallout was dangerous to film and to lie to the public and state that the radioactivity from the fallout was safe! The Natural Resources Defense Council has now estimated that it had exploded the equivalent of 40,000 aboveground Hiroshima bombs from 1945 to 1963. And, in 1997, the National Cancer Institute reported that perhaps 10,000 to 75,000 thyroid cancers could have resulted, particularly among children drinking contaminated milk in the Mountain states closest to the test sites! (“Just a little rain.”)

The Radiation and Public Health Project (http://www.radiation.org/) published an article titled: “Why Nuclear Fallout Caused 20 Million Premature U.S. Deaths since 1950” by Jay M. Gould. The article gives a very strong argument that the “gentle rain” did indeed cause approximately 20 million premature deaths. In fact the rapid rise in cancer after World War II can be attributed to the rise in chemical and nuclear pollution, which started with the bombing of Hiroshima.

Until recently, nuclear power plants have been considered unprofitable, but, with the recent hikes in energy prices, are now profitable and are seen as a solution for the energy crisis by the world’s capitalist classes despite the costs in human life. The United States capitalists, the main nuclear polluters throughout the world, are in the forefront in advocating nuclear power.

A recent study by the New York based Radiation and Public Health Project and published in the Spring 2000 edition of Environmental Epidemiology and Toxicology, examined infant death rates in counties within 50 miles and in the prevailing wind direction of five reactors:

Fort St. Vrain (located near Denver, Colo.), LaCrosse (near LaCrosse, Wis.), Millstone/Haddam Neck (near New London CT), Rancho Seco (near Sacramento, Calif.) and Trojan (near Portland, Ore). In the first two years after the reactors closed, infant death rates of babies living downwind and within 40 miles from the plants fell 15 to 20 percent from the previous two years, compared to an average US decline of just six percent between 1985 and 1996. Since no other nuclear reactor operated within 70 miles of the closed reactors, closing made these areas “nuclear free zones.” The study details the plunges in newly diagnosed leukemia and cancer cases and birth defect deaths in children less than five years old in the four county local areas downwind from Rancho Seco. This marked decline has continued through the first seven years after the June 1989 closing. In contrast, the local infant death rate rose in the two years after Rancho Seco began operations in 1974. (Once the “Gentle Rain” began to fall!)

Another article from the Guardian Unlimited in England, dated April 30, 2001, reported the same sad story of wanton death of children who have the misfortune to live downstream from nuclear power plants: Cancers blamed on nuclear power plant. James Meikle, Guardian health correspondent, wrote:

An apparent cluster of childhood cancers near a nuclear power station on the river Severn has been blamed on radiation from the plant. Chris Busby, a scientist, said he had uncovered evidence of significant levels of leukemia among children under four years old living near the aging Oldbury reactor. He believed cancer statistics for an area in and around nearby Chepstow, south Wales, between 1974 and 1990 revealed excessive numbers of myeloid leukemia, a condition usually linked to older people, and sometimes involving exposure to radiation. Three cases were recorded when there might have been expected either one or none. In all there had been seven cancers among under fours, one and a half times the national average. This mirrored a previously accepted leukemia cluster at Seascale, near the Sellafield nuclear plant in Cumbria, where there were four deaths of children under 14 from 1950 to 1983. Dr. Busby, a member of the campaign group Green Audit, and adviser to the European parliament’s green group, said: “This is the discovery of a new nuclear site child leukemia cluster. The high level of myeloid leukemia suggests that radiation is the cause.” He believed older people living downstream from Oldbury were also more likely to suffer cancers. Defenders of the nuclear industry accept the existence of clusters but point out these also occur in areas where there are no plants. “British Nuclear Fuels said no one knew the cause of the Seascale cluster, but Dr. Busby’s work was never peer reviewed, and if his previous work was anything to go by, the study could be discounted.

In the March 26, 2002, issue of the New York Times in an article titled “U.S. Orders Checks for Corrosion at Nuclear Reactors,” by Matthew I. Wald, states that:

Nuclear reactor operators have been ordered to check their reactor vessels after the discovery that acid in cooling water had eaten a hole nearly all the way through the six-inch-thick lid of a reactor at a plant in Ohio. The corrosion left only a stainless-steel liner less than a half-inch thick to hold in cooling water under more than 2,200 pounds of pressure per square inch.” At the 25-year-old Ohio plant, Davis-Besse, near Toledo, the stainless steel was bent by the pressure and would have broken if corrosion had continued, according to the Nuclear Regulatory Commission, where officials were surprised by the discovery. They said they had never seen so much corrosion in a reactor vessel. The commission, which has warned plants for years to watch for any corrosion, has ordered all 68 other plants of similar design—pressurized-water reactors—to check their lids. The commission is particularly worried about a dozen of the oldest plants and ordered them to report by early April whether they were safe enough to keep in service. The commission told these plants to demonstrate that technicians there would have noticed such corrosion in their normal inspections, had it occurred. If the liner had given way in the Ohio reactor, experts say, there would have been an immediate release of thousands of gallons of slightly radioactive and extremely hot water inside the reactor’s containment building. [Possibly leading to a meltdown] … It could be something unique to Davis-Besse,” said Alexander Marion, director of engineering at the Nuclear Energy Institute, the industry’s trade association. A goal for the investigation at the plant, he said, would be to find out not only why the corrosion occurred but also why it was not noticed sooner. ‘The plants are getting older and we’re starting to see these kinds of problems,’ Mr. Marion said.

Many opponents of nuclear power contend that the failure at the Ohio plant is systemic to nuclear power plants as they get older. Since these things have occurred in the short run, how can anyone claim nuclear power to be safe when the half-life of many radioactive materials is longer than the existence of humanity?

Clearly, the history of nuclear energy—not just in the United States but worldwide — demonstrates that the human race is not yet organized to deal with this incredible power and the waste it produces. It has left death and destruction behind every step of the way, from the mining of raw uranium, to the manufacture of plutonium, to the assembly of weapons and reactors, to the operation of the reactors, to the disposal of the waste they create.

The problem before us is to stop the deliberate killing of people by an otherwise insignificant number of them — the profiteers of the power industry.

Scientists have learned far more about nuclear energy than has been put to practical use. Scientists know this is true; they know what to do and what can be done, and yet they shamefully sit on that knowledge without protest (by and large) because they do not perceive a different social environment they could work within. The fact that science does not have all the answers is no excuse for today’s scientists not putting what they do know to work. And it is no excuse for society to allow the power industry (with the help of the U.S. government) to sow death and reap profits.

A socialist society would end the profiteering and provide a healthy environment for science. There is much to be learned as will always be the case, but this is no excuse for today’s scientists not putting what they do know to work.

The only sensible solution right now is to stop producing nuclear waste altogether and store existing waste as safely and as close to the point of production as possible. Then, begin a reverse Manhattan Project to find ways to neutralize the deadly mess we have created. or humanity will not survive the “gentle rain”.

According to portions of a government study made public February 28, 2002 by USA Today, radioactive fallout from all domestic and foreign tests caused “at least” 15,000 cancer deaths in the US alone. The qualifier “at least” renders the number 15,000 meaningless. A million is “at least” 15,000. No U.S. resident escaped exposure.

For an update on nuclear fallout, from the Iraq war, read The Queen’s Death Star Depleted Uranium Measured in British Atmosphere from Battlefields in the Middle East by Leuren Moret that can be found at .