Representatives of the energy services company Halliburton told EWG in the fall of 2011 that 50-to-60 percent of new wells being drilled in Kern County were hydraulically fractured. And according to data in the 2009 annual report of the Division of Oil and Gas, the five most productive oil fields in Kern County had 1,527 new wells drilled that year. From these figures, EWG estimates that, at a minimum, more than 750 California wells were fracked in 2009 alone. This is clearly an underestimate, however, both because it counts only a subset of the wells in California – and about half as many wells were drilled in 2009 as in each of the previous two years. — California Regulators: See No Fracking, Speak No Fracking 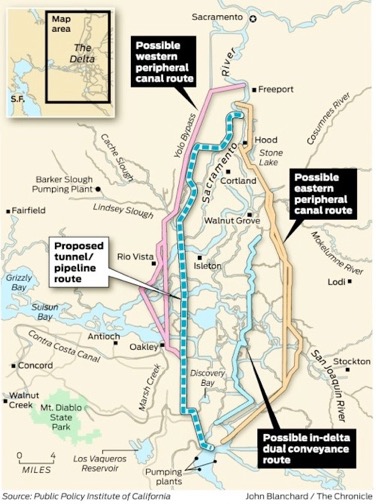 Thirty years ago, Californians soundly rejected a proposal to build a canal to move water around the Sacramento-San Joaquin River Delta and deliver it to Central Valley farmers, Southern California residents and some Bay Area cities.

The projected costs and threats of environmental damage resulted in an overwhelming defeat at the hands of voters statewide.

Now, planning for the construction of a similar canal is under way, and a final design could be selected by the end of the year.

The designs under consideration are smaller than the last proposal, but the biggest difference between now and 30 years ago is that this time around, voters will not make the final decision.

Our rights are being Facked by Big Oil and Their Federal, State, and Local Governments 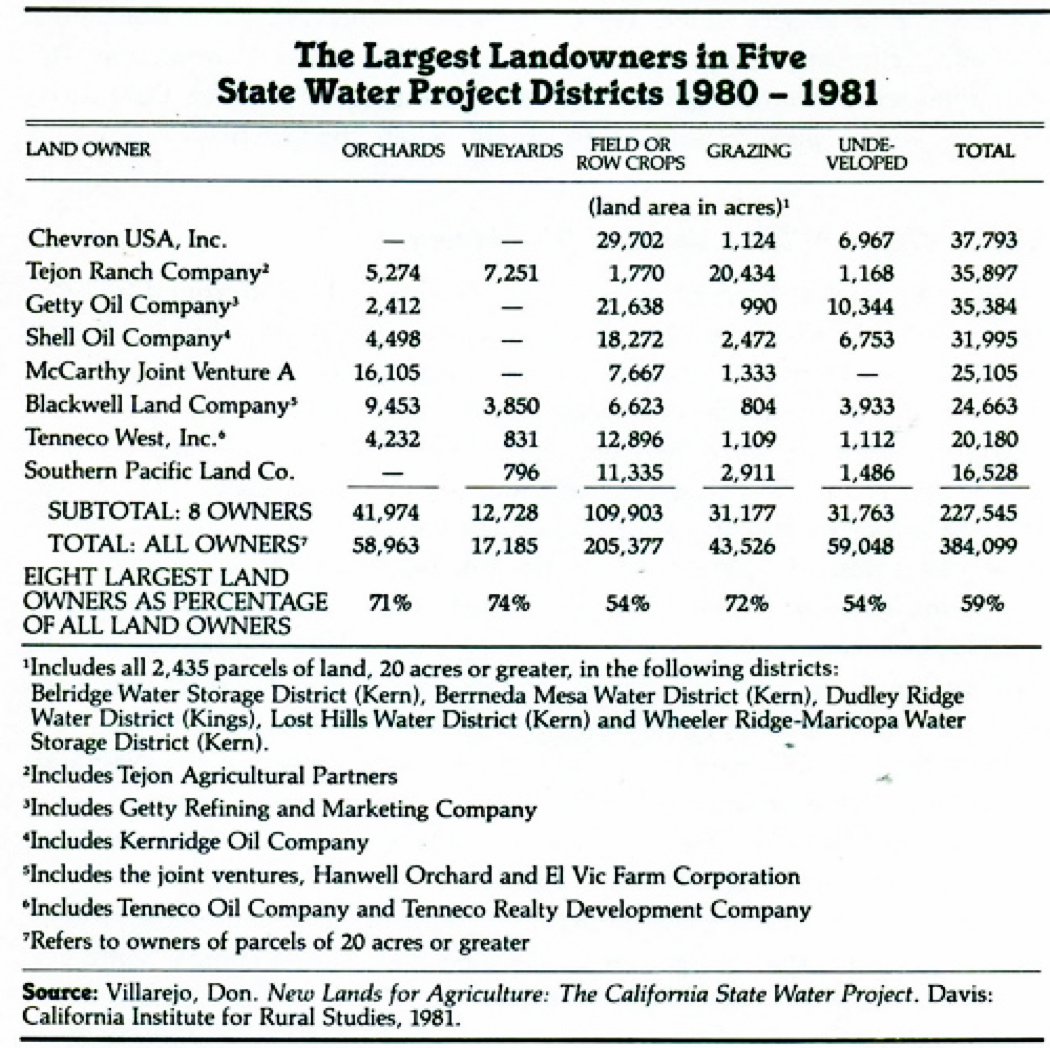 Most people don’t know that the big energy companies control most of the water in the San Joaquin Valley. Now, with fracking profitable in California due to the high price of fuel, they want to frack California and our water resources required by the fracking process. (As they are trying to do in the rest of the country.) This table if from pages 133-135 of Two Californias: the truth about the split-state movement by Michael DiLeo, Eleanor Smith:

At the peak of California production in 1985, Kern County producers needed roughly four-and-a-half barrels of water to produce a single barrel of oil. . . . Today, that ratio has jumped to almost eight barrels of water per barrel of oil. This use has been sanctioned despite the three-year drought that has ravaged the valley, causing reductions in the water delivered by the State and Central Valley projects canals. Not only are farmers generally short of water, dozens of small poor agricultural hamlets —including Alpaugh, Seville, East Orosi and Kettleman City — have been forced to tap groundwater. And that groundwater is often contaminated with agricultural pollutants, including arsenic and nitrates. — Oil and Water Don’t Mix with California Agriculture

A New Factor in the ‘Mix’ — Fracking!

Shale is found in about one sixth of California. “The Monterey shale overlaps much of California’s traditional crude producing regions. It generally runs in two swaths: a roughly 50-mile wide ribbon running length of the San Joaquin Valley and coastal hills, and a Pacific Coast strip of similar width between Santa Barbara and Orange County. — A Big Shale Play in California Could Boost the Golden State’s Oil Patch

This need for more water, at the same time that the big energy companies have already sucking dry the Colorado water basin, at a time of drought in the south west.

As fresh drinking water is depleted due to fracking, the Delta, San Francisco Bay, etc., will become even more polluted.

Farmworkers and small farmers will have less safe drinking water, as the valley water table gets more polluted by the fracking process.

There have been world wide struggles against the privatization of water just as there have been war in the middle east for control and production of war. These wars are now coming home.

With the recession/depression we will soon not be able to drink and eat unpolluted water and food —our basic ‘unalienable rights to life, liberty, and the pursuit of happiness, are directly under attack!

As these issues become clear, we can begin to unite all, fight for, and win a better world.