Editorial: Railroad Workers Sold Out By the ‘Socialist’ Squad, ‘Socialist’ Bernie Sanders, and The Republicrats! — These ‘Socialists’ Could Have Been Heros!:

Editorial: Railroad Workers Sold Out By the Squad and Bernie Sanders and The Republicrats! — They Could Have Been Heros! They Could Have Stood Up with the Railworkers, who, by majority vote, voted against and Opposed the !%/Labor Bureaucracrates/Biden propose sellout! Instead, they voted to impose the sellout! The Squad and Sanders contine to stay mired in the swamp  of Democratic Party politics! Where they are allowed to do the talk, but not stand up for the workers and the entire Working Class! 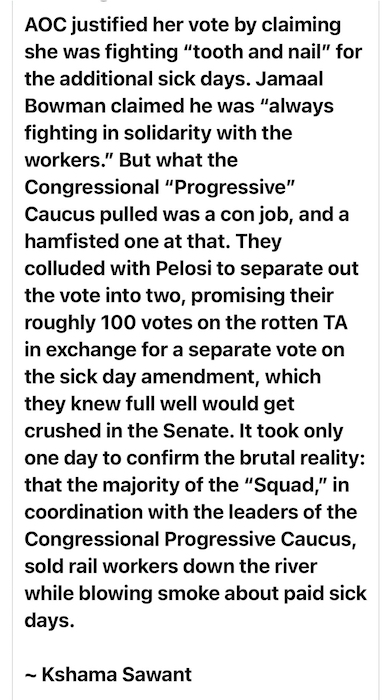 In the past period, the squad voted for huge increases in the military-industrial-conplex, the largest single environmental polluter in the world, while giving lip service about protecting the environment

The Rail Workers have been sold out by their union leaders who are in a stated alliance with their employers and the Democratic Party.

The ‘Squad’ Could have Published the case of the workers. The could have read the open letter stating the rank and file workers’ case for justice to the floors of congress and publicized their demands to the World!  Railroad Workers United Open Letter to Congress and the President  . . While the tentative agreement provides significant wage increases, workers on the railroads have stated clearly and repeatedly that their fight is not just about money. Railroad workers are fighting for the right to live—and have a life—outside of work.    The freight rail industry is structured as a non-competitive oligopoly that is dominated by seven rail carriers and operates at the behest of Wall Street, prioritizing the maximization of profit for rail executives and shareholders, even if it comes at the expense of endangering the broader public and irreparably damaging the supply chain. In the past few decades, the rail industry has adopted the Precision Scheduled Railroading (PSR) model, which has benefited investors at the cost of railroad workers and the public at large. As noted in the Presidential Emergency Board Report #250, because of the PSR model, railroad companies have reduced the workforce by about 30 percent in 6 years, have instituted attendance models which pressure workers to work through exhaustion, reduced safety and checking procedures, all in order to reduce costs and increase profits.     In fact, the railroad industry is the most profitable industry in the country. However, the billions of dollars of profit comes at the cost of railroaders being on call virtually 24/7, unable to access routine health care, missing the deaths of their loved ones and the birth of their children, and dying by the hundreds in work accidents. It has also come at the cost of the broader public, as PSR has created a situation where there are not enough working railroaders to service the demand which the rail industry faces, making it a direct cause for the current supply-chain crisis and a key contributor to inflation.      The central demand of railroad workers has been increased days of sick leave which has been wholly absent from the tentative agreement. It is for this that workers are willing to go on strike. Railroad workers have been without a contract for over 3 years, dealing with these issues without resolution and without support from the Congress and Presidency. Urgent action has only taken place after the urging of big business not of workers.

The way forward is for railworks and all workers to form committees where they work and where they live. All workers in the United States, are under attack. To fight the government workers need a political organization that is of, by, and for workers against the 1% oppression and exploitation!