The United States Does Not Require Paid Sick Leave! — Most Countries Require  Paid Sick Leave!   Instead Of Threatening The Right of Rail Workers’to Strike, A Worker’s Party Would Require the Right to Not Work, When Sick, Like Most Industrial Countries!  If Congress Is Going to Do Anything Biden And Company Should Support Paid Sick Leave For all! 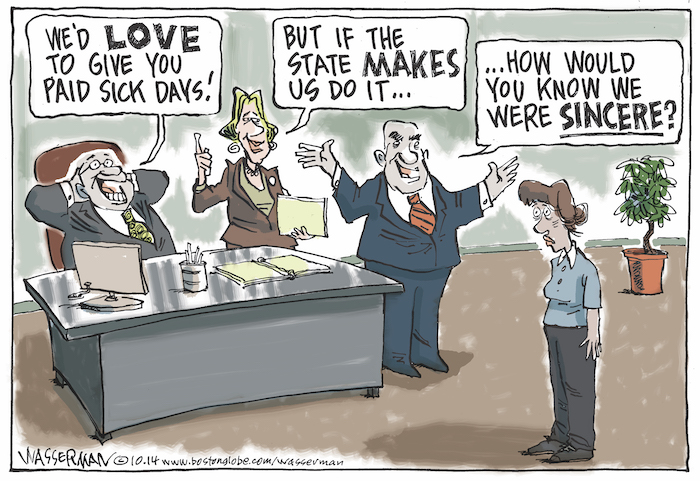 Paid Sick Leave: In most nations, some or all employers are required to pay their employees for some time away from work when they are ill. Most European, many Latin American, a few African and a few Asian countries have legal requirements for paid sick leave for employees. In nations without laws mandating paid sick leave, some employers offer it voluntarily or as the result of a collective bargaining agreement. However, in countries with poorer labor laws such as South Korea, employees are usually forced to use paid vacation time for sick leaves, and the sick leaves exceeding the remaining vacation time are unpaid.

U.S. Department Of Labor: Sick Leave: Currently, there are no federal legal requirements for paid sick leave.  For companies subject to the Family and Medical Leave Act (FMLA), the Act does require unpaid sick leave. FMLA provides for up to 12 weeks of unpaid leave for certain medical situations for either the employee or a member of the employee’s immediate family. In many instances paid leave may be substituted for unpaid FMLA leave.     Employees are eligible to take FMLA leave if they have worked for their employer for at least 12 months, and have worked for at least 1,250 hours over the previous 12 months, and work at a location where at least 50 employees are employed by the employer within 75 miles.

In a Pandemic, US Workers Without Paid Medical Leave Can’t Afford a Sick Day  Coronavirus focuses new attention on need for laws requiring paid time off The coronavirus pandemic has fueled the demand for American workers to be provided with paid sick leave at their jobs, as essential workers risked not only contracting coronavirus but also losing two weeks of income if they tested positive for the virus.     US workers receive far fewer days off than workers in other major industrialized nations, and work an average of four to eight more hours a week than the average worker in Europe. More than 32 million workers in the US had no paid sick days off before the pandemic, and low-wage workers are less likely to have paid sick leave and other benefits such as health insurance.

News Flash:63% Of Americans Are Living Paycheck to Paycheck — Including Nearly Half of Six-Figure Earners

If there is no  paid sick leave,  workers will work sick!:  What’s the Risk in Working While Sick? Do you have employees that come to work, but may not feel well enough to perform their duties?    While some employees might consider themselves heroes or dedicated, there is actually a term for it – presenteeism.    The unfortunate truth is, being sick can lead to injury on the job – costing the employer BIG, and placing employees at risk.