Roger and I were twin brothers. In our youth we did most everything together, after the success of the Cuban Revolutiona, when we were in our late teens, we dedicated our lives for a better world — a socialist world! We have remained socialists for all of our adult lives.

He was happy, during the civil rights movement during the 1960s. when he was arrested with Glodia Righardson in Maryland, and Civil Rights anti-Mayor Daly demonstrations in Chicago.

In 1972, in Chicago I learned that he suffered from bipolor disorder(manic-depression), when he was arrested in Chicago. It was then that he drew this crayon drawing. (Roger always had aritistic skills.) 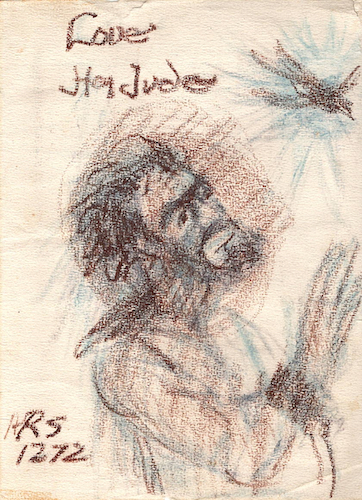 In this image one can see the anguish that he suffered from during his adult life. I think the happiest time for Roger was when he moved to Boston, married Ann, and lived in their house, with their two children, Rebecca and Jeffery and his son Danny.

Our vision of socialism was the common ownership of the means of production, and common control and protection of all property and wealth, science and society will be in harmony with the ecosystem and humanity’s future.

My world and the world was better with Roger in it.  I will miss my twin brother! We kept in touch for 81 years!

I will miss him!