Cancer and Blue-Collar Workers — Who Cares? By Peter F. Infante 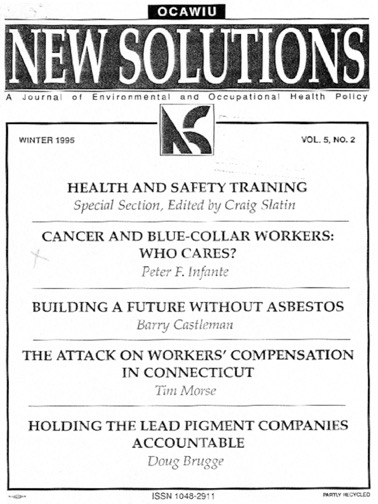 This paper was presented before the President’s Cancer Panel meeting on “Lung Cancer: Societal and It is reported that the National Cancer Institute (NCD Clinical Implications” last October 5 at Tysons Corner, Virginia. This article by Peter Infante is a cogent summary of recent information on the number of workers ex- posed to carcinogens in the U.S. and the inadequacy or incompleteness of current regulations. Dr. Infante has been a leader for many years in pointing out the risks of cancer and other serious diseases borne by workers, and he made this recent eloquent presentation to the President’s Cancer Panel last October.

It is noteworthy that he estimated a considerable ongoing excess risk of death from lung cancer associated with a new Permissible Exposure Limit for cadmium; this is because of the “technological/economic feasibility” constraint on setting OSHA standards. This is one type of constraint that worker health and safety advocates will have to continue to battle in the coming years.    . .

Another recommendation Infante made to the President’s Cancer Panel was to fund cancer registries to “collect detailed occupational histories in order to make data bases available to facilitate the identification of unrecognized causes of cancer related to occupational exposures.” This is clearly needed in the U.S., because most cancer registries don’t routinely collect this type of information. Montreal already has a model for this type of system (1) which can be supported by worker health and safety advocates in the U.S. — Richard Clapp, Scientific Solutions Editor

Cancer and Blue-Collar Workers — Who Cares?

I am going to start with my conclusions and then provide you with the basis for them.

Conclusion #1: A much greater national effort    to the NIOSH budget for the purpose of developing in the study of occupational carcinogens is better control technology that will result in the required. Our failure to make that effort is resulting in a disproportionate (and preventable) cancer burden being borne by blue collar workers.

Conclusion #2: More funding needs to be allocated to the NIOSH budget for reduction of human exposure to carcinogenic substances found in the workplace.

The International Agency for Research on Cancer (IARC)—the expert cancer body of the World Health Organization—identifies chemicals that cause cancer in the general environment, in the occupational setting, and through medicinal drug administration. IARC also evaluates industrial processes in which the specific substance(s) that cause the cancer have not been identified. The data in Table I indicate the IARC conclusions of confirmed causes of human lung cancer by the source used to identify the cancer hazard. The estimated number of individuals with potential for exposure to these carcinogens also is presented.

Source of Numbers (Tables Are On The Bottom Of Page)

Most of the estimates for number of workers exposed were derived from the National Occupational Exposure Survey (NOES) conducted by the National Institute for Occupational Safety and Health (NIOSH). If the Occupational Safety and Health Administration (OSHA) has published a proposed or final standard for these ,-/ carcinogens, the estimates were derived from these Federal Register publications. For several occupational carcinogenic exposures shown in the Tables, estimated numbers of workers exposed are not provided because the data were not available (aluminum production, coal gasification, hematite-mining, soots) or occupational exposure is no longer thought to exist (bischloromethyl ether and chloromethyl methyl ether, mustard gas).

However, estimates for hematite miners are included in the estimates for occupational radon exposure as provided by the Mine Safety and Health Administration (MSHA). The estimate for number of tobacco smokers was derived from the American Lung Association for 1991. As can be seen from Table I, all of the IARC recognized lung carcinogens with the exception of one carcinogenic exposure, tobacco smoke, have been identified by studying industrial workers. An estimated 13 million worker exposures are associated with these substances or processes.

Table II presents data for substances that are probably human lung carcinogens based upon animal and epidemiologic study results, but IARC has not concluded that they are confirmed human carcinogens. About eight million exposures-are associated with these substances.

Table III shows data for substances that OSHA has regulated, or is proposing to regulate as carcinogens that are lung carcinogens. As indicated in the Table, a standard to control occupational exposure to hexavalent chromium compounds will be proposed in May 1995.A proposed standard to control occupational exposure to environmental tobacco smoke was published this year.

Cancers Other Than Lung

Table IV indicates the IARC confirmed human occupational carcinogens by site of cancers other than lung. Twenty-six substances or industrial processes known to cause cancer are shown. As can be seen in the Table, the vast majority of these. are confirmed or suspected of causing at least several types of cancer in humans. IARC has concluded that 14 of these 26 substances/processes    also cause lung cancer. (The data for lung cancer were shown in Table I.)

Thus, the data in Tables I-IV demonstrate that 21 substances or industrial processes are confirmed. causes of human lung cancer and 26 substances or workplaces are known to cause cancer of sites other than of the lung. Furthermore, a vast majority of these 26 substances/ processes are known or suspected to cause several types of cancer in workers. It is with this concern in mind that I come to my first conclusion— that-a much greater national effort in the study of occupational carcinogens is required. And that our failUre to make that effort is resulting in a disproportionate (and preventable) cancer burden being borne by blue-collar workers.

From the data in Tables I and II, it can also be seen that there are an estimated -21million exposures to these lung carcinogens, many of which are associated with cancers in addition to lung cancer. When these data are contrasted with the estimated number of tobacco smokers (46.3 million), occupational lung carcinogen exposures are 45 percent of the number of tobacco smokers. And this estimate does not include other possible lung carcinogen exposures found in the occupational setting –    substances for which there is either sufficient or limited data on carcinogenic response in experimental animals, or limited data on lung cancer in humans. With regard to cigarette smoking, there is a huge national effort to inform the public about the hazards and to reduce consumption. In contrast, there is little emphasis on the education of the public    (including    workers)    about    occupational carcinogens and very little emphasis has been placed on the reduction of these exposures.

The data in Table V show the excess cancer risks associated with the old and new Permissible Exposure Units (PEls) for substances regulated by OSHA since the 1980Supreme Court decision on benzene. Prior to setting new PELs, this decision required the agency to determine the significance of risk associated with the old PEL and to make a finding that the new PEL would significantly reduce the risk.

OSHA clearly considers a lifetime occupational excess risk of 1 extra cancer death per 1,000 workers significant, however, it was not possible to set lower limits for these substances because of technological/ economic feasibility. The Environmental Protection Agency (EPA)regulates excess cancer risks to the general public in the range of between 1 per 100,000 population to 1 per million. These observations lead to my second conclusion—that    more funding needs to be allocated to the NIOSH budget for the purpose of developing better control technology that will result in the reduction of human exposure to carcinogenic substances found in the workplace.

The data summarized in Table VI, show the importance of studying the workplace to identify preventable causes of cancer. The evaluations by IARC through volume 60 of this year have concluded that 22 substances or processes are human lung carcinogens. Of these 21 (95 percent) have been identified by case reports and epidemiologic studies Of workers: IARC has also concluded that 62 substances or processes are carcinogenic to humans and 34 (55 percent) have been  identified    by studying workers.    If one subtracts    there is no health benefit from workers being exposed to carcinogenic medicinal drugs from this evaluation since asbestos, benzene, and arsenic, and so forth; 34 of 44 (77 there is a health benefit from administration of these percent) of all classified human carcinogens have been drugs, most of which are cancer treatment drugs, and    identified by studying workers.

The identification of such a high proportion of human carcinogens from the study of blue-collar workers is clearly a reflection of their high relative cancer risk. These high relative risks, or high probability of industrial workers    developing    cancer    in    relation    to    specific exposures, have been borne out by the results of quantitative cancer risk assessments, some of which are shown in Table V. This high risk of cancer is reason alone to intensify the study of cancer in the work environment.

In the early 1900s, canaries were routinely taken down into the mines. The men used these canaries to give them the first sign of possible disaster or death. When the canaries passed out or died, the men knew that there was a problem with exposure to carbon monoxide and immediate action was needed. The analogy here is clear. Blue-collar workers appear to be the canaries in our society for identifying human chemical carcinogens in the general environment. (Today, their plight is even worse because we are paying little attention to their deaths.) The fact that occupational cancer is a sentinel for identifying carcinogenic exposures in the general environment is reason alone to justify an intensified cancer research effort in the workplace. Yet, our efforts to study their exposures to carcinogens, or to develop technology to decrease that exposure,. or to develop safe substitutes have been relatively minimal.

Given the obvious benefits to an intensified cancer research effort directed toward the study of workers, I ask myself why it has been given so little attention. In my opinion, this inattention is reflected in the way data on health are gathered in general in the U.S. Health data are published by sex and race, but not by social class. This is no accident. It reflects a social class bias by those gathering the data. I suggest disproportionate death from cancer among blue-collar workers is a social class issue and that the problem is neglected because it is a potentially explosive issue. It raises questions about the control of production and cost of production.

It is reported that the National Cancer Institute (NCD allocates $20 million per year (1 percent of its budget) for occupational cancer studies. Why is the amount of funding to investigate cancer in the workplace so disproportionately low in relation to the “success” of confirming human causes of cancer by studying blue-collar workers?

Recommendations to the President’s Cancer Panal: 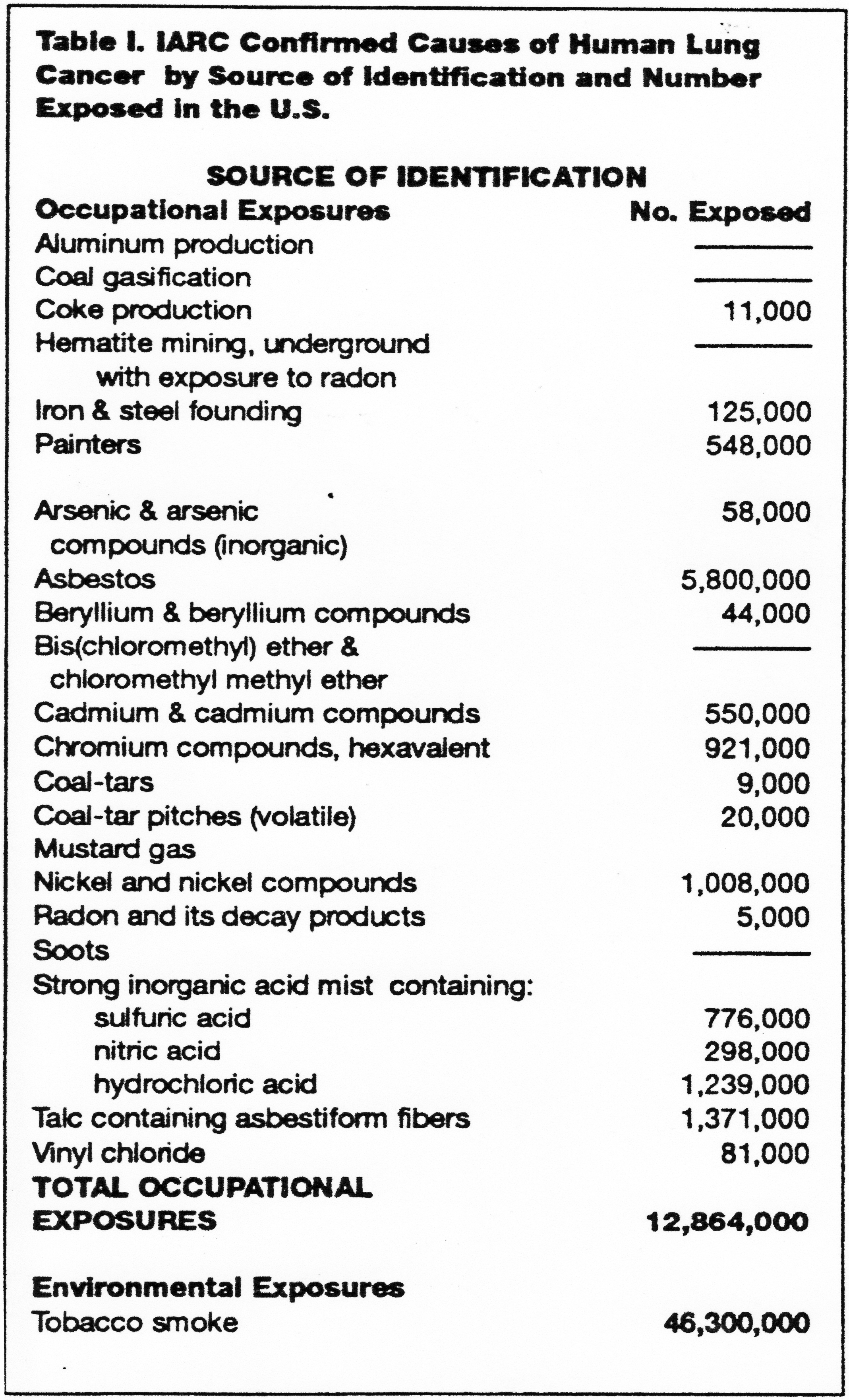 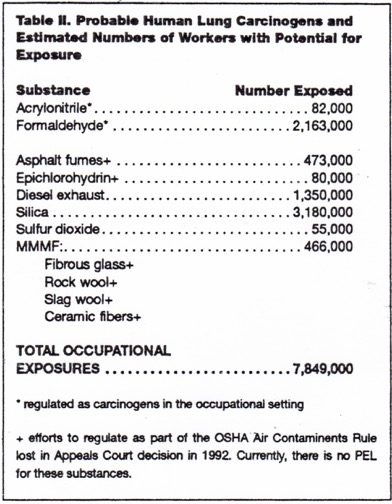 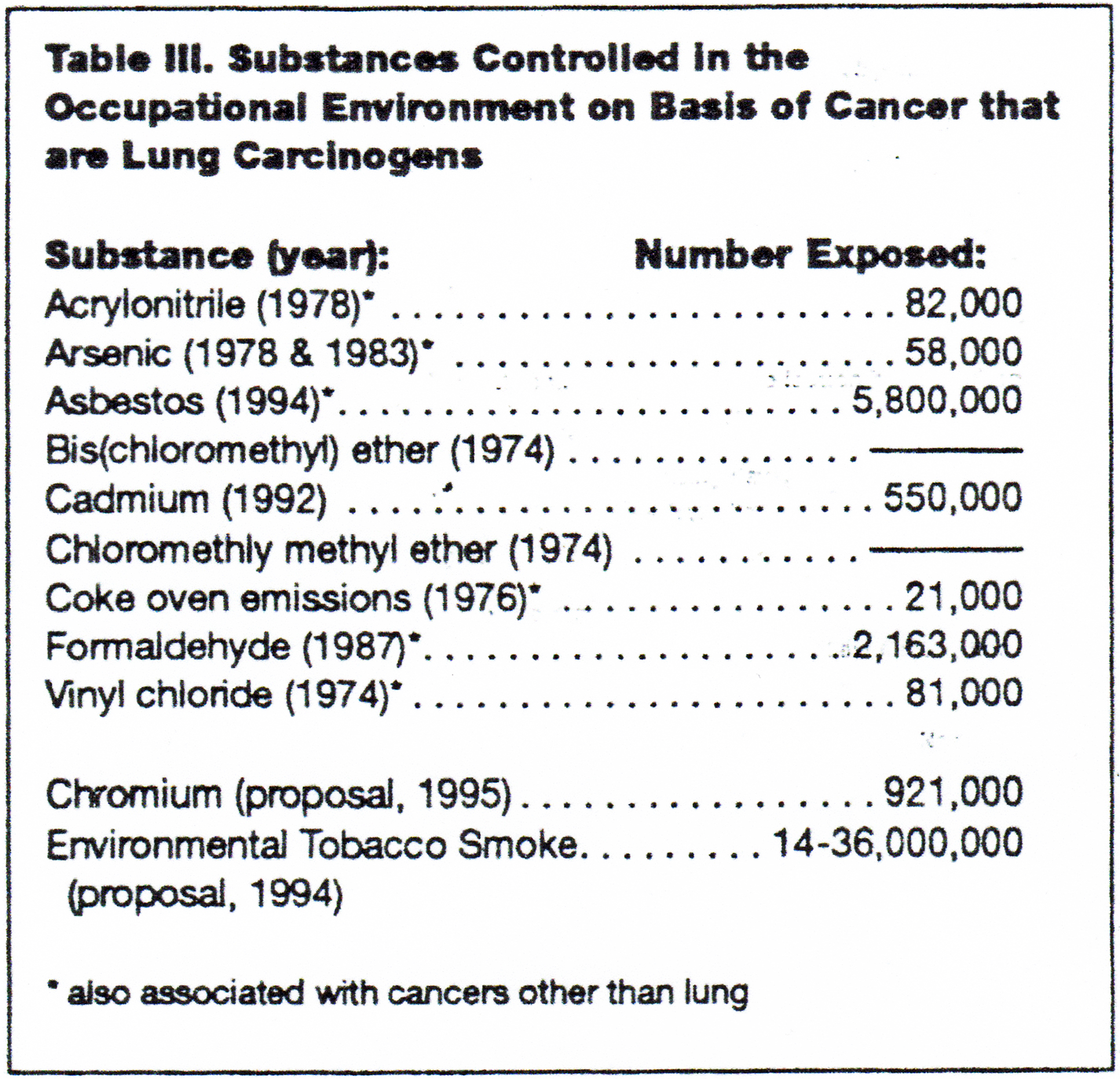 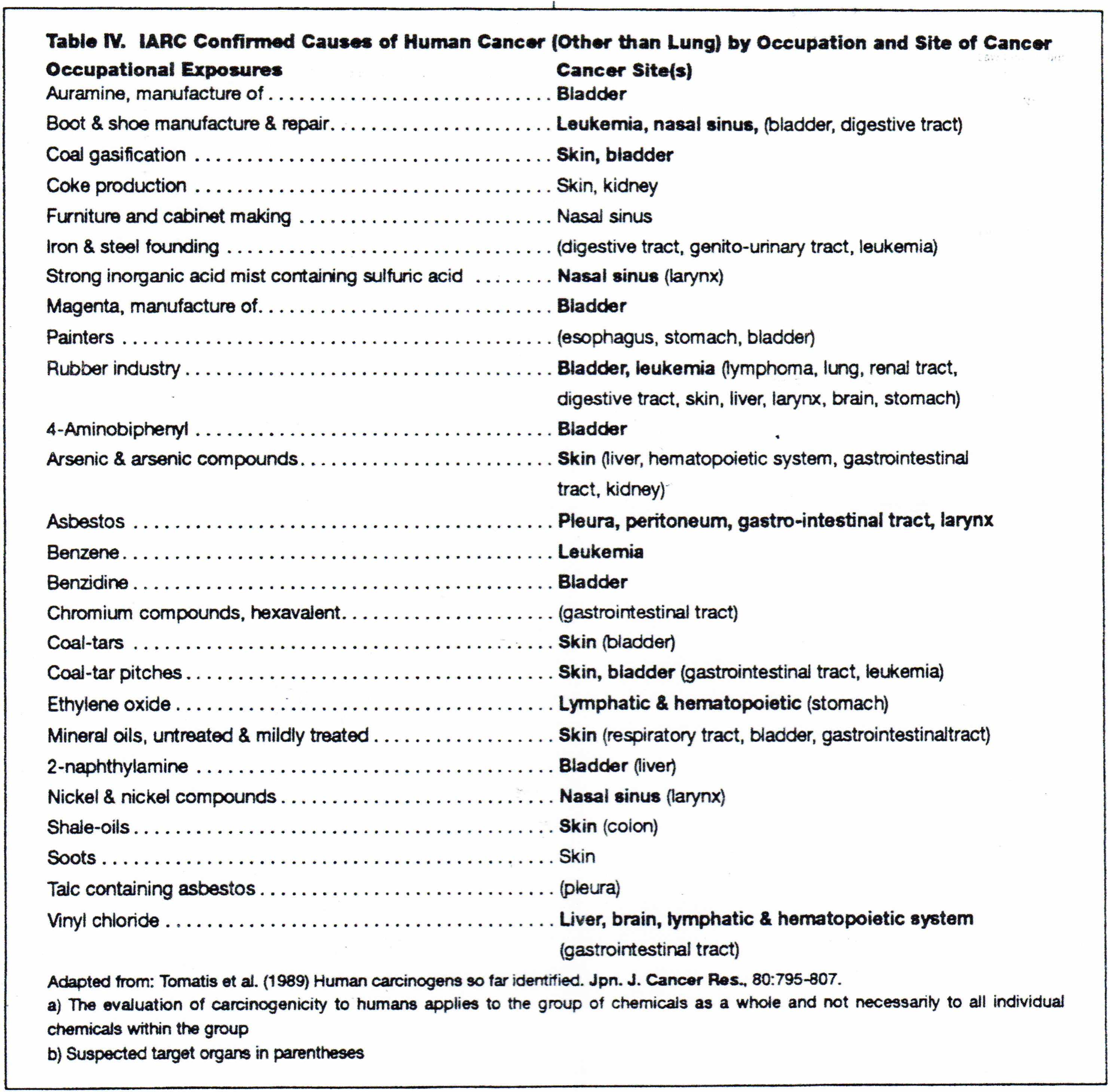 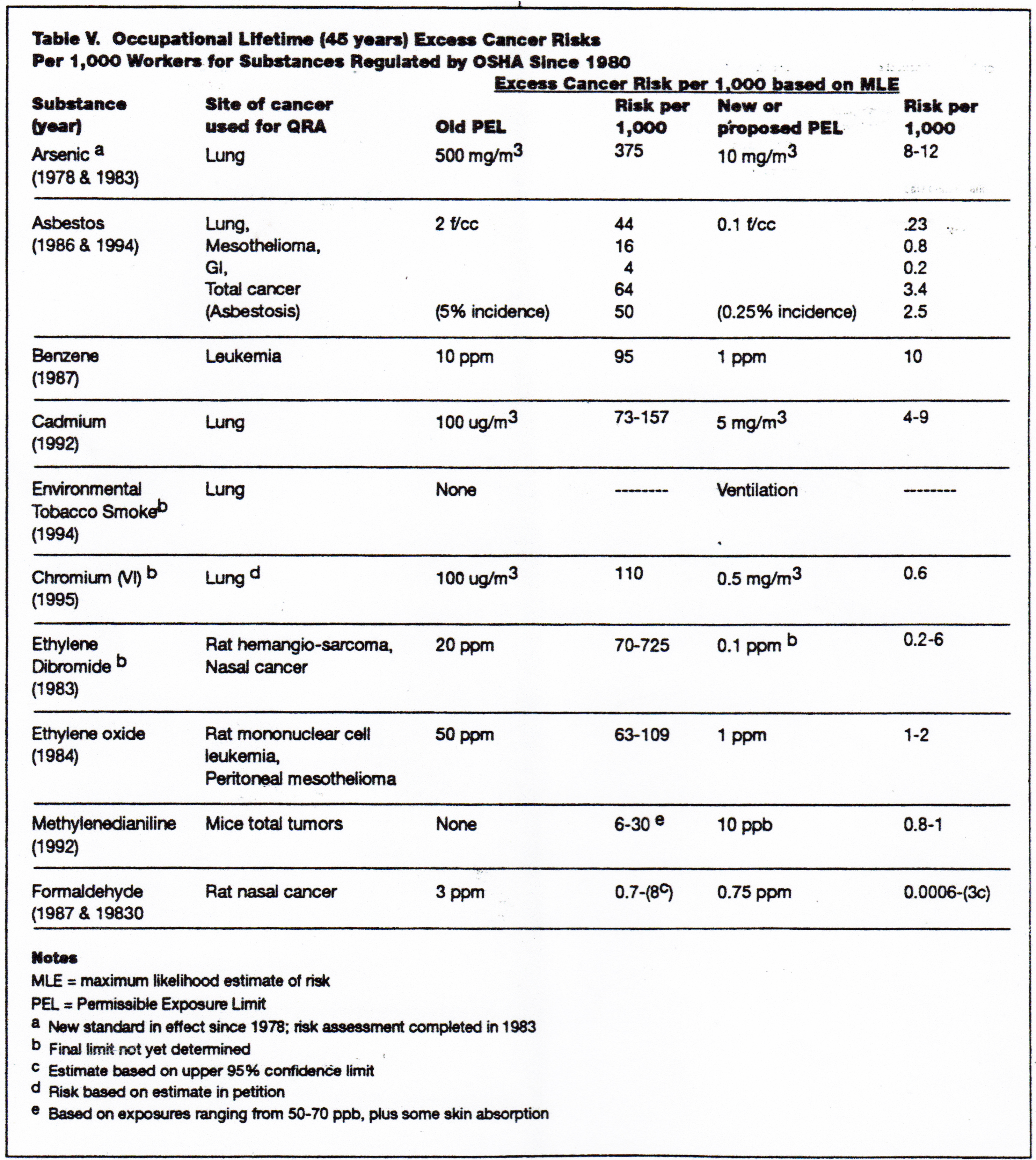 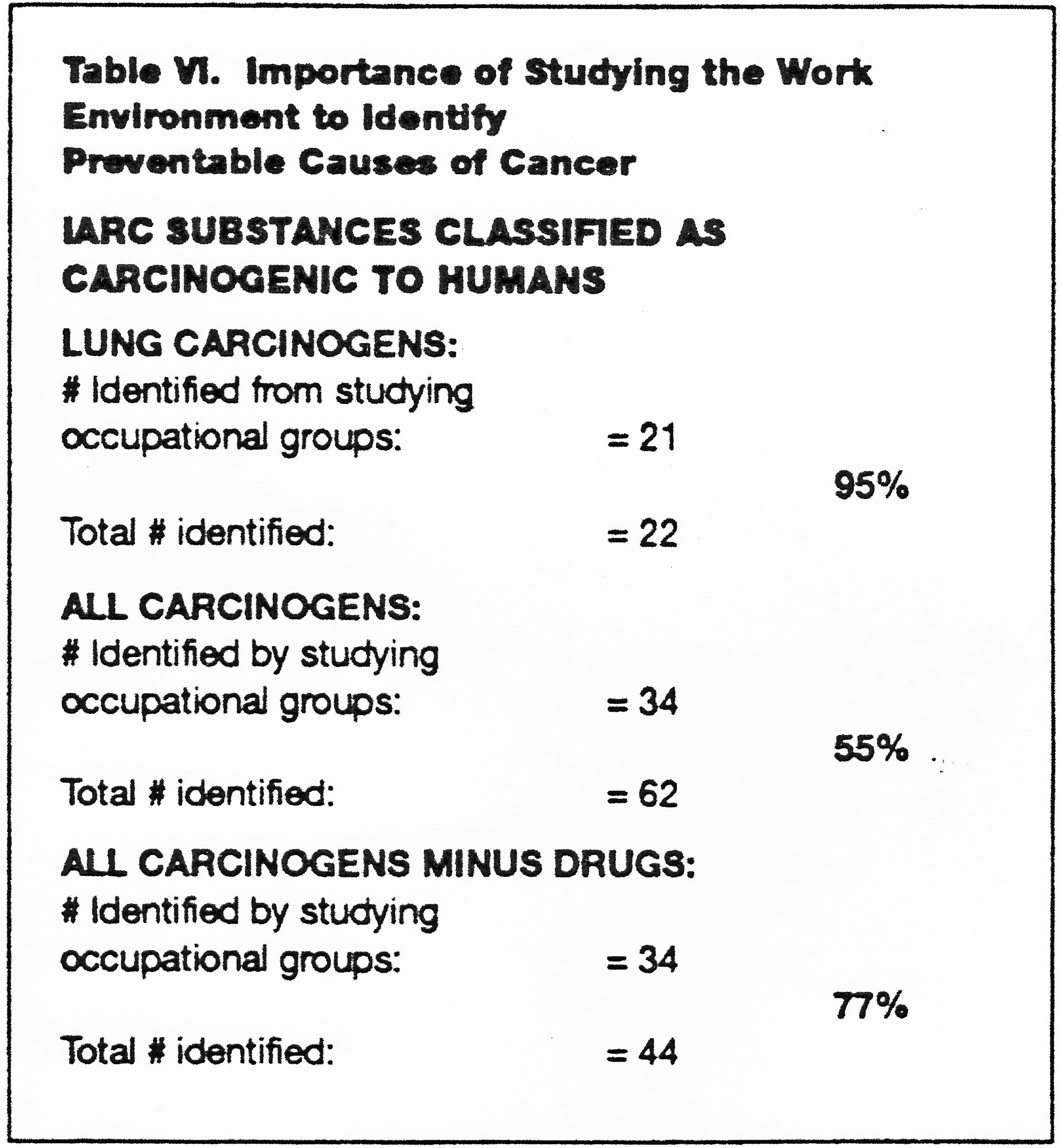