There is nothing more demoralizing for the working class than to be sold out by their ‘leaders’ and suffer a defeat, in their standard of living, without a struggle or fight. — .  It is as true in this country as it is in Greece.

Greece into the elections – what stage are we at? 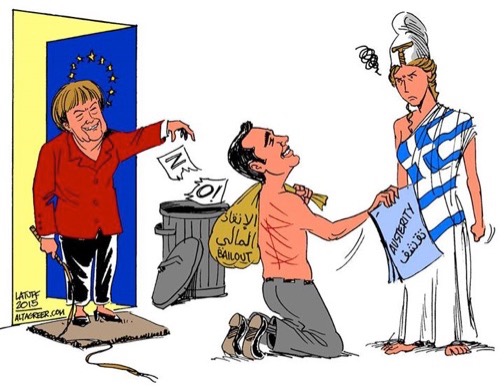 The Troika’s Colonization of Greece

The colonization of Greece has already begun by the sell off of Greece’s assets to the Troika imperialists. In the current stage of capitalism There is no longer any basis for support to reformism and its lesser evil politics. Worldwide the capitalist class is socializing its debts and transferring its losses to the working class and the poor. Now, in its search for profits, it is in a feeding frenzy — stripping the working class and the poor of any and all assets. This is what happened historically in the Roman Empire (Pax Romana) on its way to debt bondage and serfdom. The only solution for capitalism, at this time, is the worldwide application of the Iron Heel, as described by Jack London in his book, The Iron Heel.

The lesson to be drawn is that now is a time for a united front, of the working class to opposed austerity — the pauperiztion of the working class! And the workingclass to build their own organizations, acting in their own class interests, to fight against the 1%, both nationally and internationally to regain their standard of living and the pursuit of happiness. To form a socialist leadership to lead the struggle of the working class. The revolution in Greece is dead — long live the Revolution!