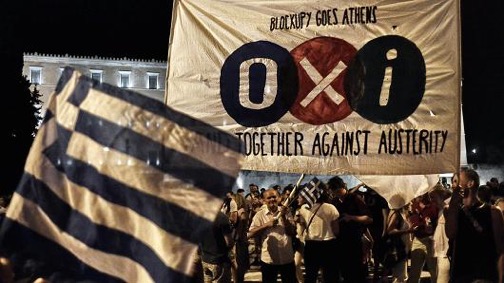 During the past weeks, the popular Greek political party, Syriza, has proven itself, not be a workers party, but a popular front. (A political blocs with the bourgeois at the expense of the working class. In other words a Popular Front. — Encyclopedia of Marxism: Glossary of Terms).

Although, many workers joined and voted for Syriza, programatically, it was/is a bourgeoisie party. Although Syriza opposed austerity, it did not oppose the 1% who are responsible for austerity throughout the world.

Politically, occupy wall had a more advanced position when it identified the enemy as the 1% that own and/or control the world’s wealth!

Since it got elected, Syriza has been doing a balancing act of opposing the Troika, while not opposing the 1% in Greece, and claiming to represent the working class and the rest of the 99%, when they opposed the austerity imposed by the Troika in return for bailing out the banks 2008.

Right after Tispris, the elected prime minister of Greece, has never opposed austerity, but rather has tried to negotiate a more ‘humane’ austery with the Troika. And. Despite being battered around by the Troika, he sill pleaded for them to be more humane.

Austerity is the program of world capitalism to rob from the 99% to pay for the 2008 bailout of the 1%.

In my 2008 essay, Occupy Wall Street Demonstrates The Need To Build An Organization of All Anti-Capitalist Forces!  I wrote

The occupy movement is the only mass movement that recognizes this fact — it identifies the enemy of humanity as the 1% that own and control the wealth! (Unlike the trade union misleaders and the other misleaders of the oppressed who strive to be in Partnership with the 1%) The current bipartisan politics and economy of capitalism its markets, its crises, its wars, and its contamination and destruction of the environment all have a global character. Never before has this been so plain as today. World War II and its military deficit spending combined with the betrayals of the revolution and the world working class by the Communist and Social Democratic Parties and the trade union bureaucracies of the working class organizations, led to the recovery of capitalism from the last economic crisis brought about by the depression of the 1930s. Just as integration of the American society was defined by Black Liberation activist, Dr. Julia Hare as the illusion of inclusion. The New Deal resulted in The illusion of inclusion in the division of the wealth produced by society. In today’s world, this trickle down theoryhas lost its illusion. The very cure for the last Depression has led to the present crisis — The very ‘cure’ for the last Depression has led to the present crisis.

I agree with Jorge Martín who wrote in his essay, Greece: government’s proposals to the Troika turning OXI into YES:

Beyond Greece there are important lessons to be learnt, particularly as parties like Podermos in Spain come closer to power. There is no way to break with austerity, it is not possible to implement even modest measures in defence of the living standards of working people within the limits of capitalism in crisis. In order to end austerity we must break with capitalism.”

The time has come to oppose the austerity programs of the 1% who rule the world — not to edure them!

The Greek events have proven that we don’t need popular fronts, we need workers fronts based upon our need’s and the need’s of our allies in the 99%!

As the Capitalist Robber Barons Steal from the 99% — Only the 1% Voted For Austerity — The 99% Should Decide On Austerity — Not  The 1% Who Profit From Austerity!