Occupy Wall Street Demonstrates The Need To Build An Organization of All Anti-Capitalist Forces!

“Never doubt that a small group of thoughtful, committed citizens can change the world. Indeed, it is the only thing that ever has.”    — Margaret Mead

Capitalism Does Not, and Never Has, Worked for the Masses! In Its Death Agony, Capitalism Is Traveling About The World Like The Four Horsemen of the The Apocalypse, Spreading War, Famine, Pestilence, and Death. The very future of Humanity Is Now At stake! 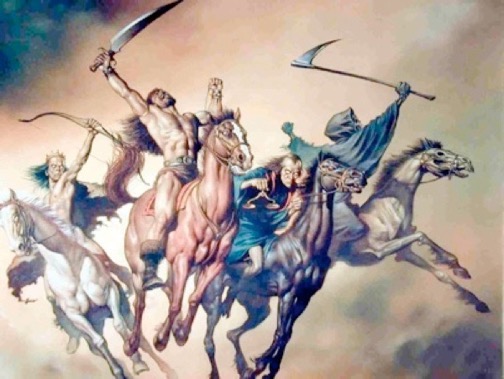 The occupy movement is the only mass movement that recognizes this fact. It identifies the enemy of humanity as the 1% that own and control the wealth! (Unlike the trade union misleaders and the other misleaders of the oppressed who strive to be in ‘Partnership’ with the 1%)

The current bipartisan politics and economy of capitalism — its markets, its crises, its wars, and its contamination and destruction of the environment — all have a global character. Never before has this been so plain as today.

World War II and its military deficit spending combined with the betrayals of the revolution and the world working class by the Communist and Social Democratic Parties and the trade union bureaucracies of the working class organizations, led to the recovery of capitalism from the last economic crisis brought about by the depression of the 1930s. Just as integration of the ‘American society’ was defined by Black Liberation activist, Dr. Julia Hare as the “The Illusion of Inclusion”. The New Deal resulted in “The Illusion of Inclusion” in the division of the wealth produced by society. In today’s world, this ‘trickle down theory’ has lost its illusion.

The very ‘cure’ for the last Depression has led to the present crisis.

As we enter this crisis, which French Premier François Fillon described as “the edge of the abyss”, there is no New Deal solution for capitalism — it cannot longer afford The New Deal. To paraphrase Leon Trotsky:

The New Deal despite its first period of pretentious resoluteness, represents but a special form of political perplexity, possible only in a country where the bourgeoisie succeeded in accumulating incalculable wealth. The present crisis, far from having run its full course, has already succeeded in showing that New Deal politics, pens no new exit from the economic blind alley.

2009 will be the largest increase in debt in history. While the rich are getting richer, the world’s peoples are getting poorer. To quote from Reflection by Fidel: A Science Fiction Story:

. . .at the end of 2008 the total debt of the United States –including that of the federal, state and local administrations, the businesses and families—amounted to 57 trillion dollars, that is, over 400% of its GDP, and that country’s budget deficit reached almost 13% of its GDP in fiscal year 2009. . . .  The Brazilian theologian Leonardo Boff, who is not a disciple of Karl Marx but an honest catholic among others who are not willing to cooperate with the imperialism in Latin America, has recently said that ‘… we are risking our destruction and the devastation of life’s diversity.”’ … almost half of humanity is living today under the poverty line. The wealthiest 20% are consuming 82.49% of all of the riches on Earth while the poorest 20% are living on a tiny 1.6%.’ He also quotes the FAO as he warns that ‘…there will be in the upcoming years from 150 to 200 million climate refugees.’ And then he adds that ‘humanity is consuming today a 30% above the regenerating capacity…the planet is giving unmistakable signs that it can stand it no more. . . .

In an International Monetary Fund publication, Finance and Development, Boston University professor Laurence Kotlikoff tips readers off to this stark reality, which many of them undoubtedly already suspected. Kotlikoff told the Boston Globe and Mail that the United States national debt is not the $13.5 trillion that people around the world believe it is; rather, he estimates it at $200 trillion, or 840% of U.S. Gross Domestic Product. “As Goes the Dollar So Goes the World, November 1, 2010

There is no longer any basis for support to the reformism and its ‘lesser evil’ politics.

The only solution for capitalism, at this time is the worldwide application of the Iron Heel, as described by Jack London in his book, The Iron Heel.

We must begin the struggle against the ruling class monopoly of political power. As Frederick Douglass stated: “if there is no struggle there can no progress. Those who profess to favor freedom and yet depreciate agitation…want crops with out plowing up the ground, they want rain without thunder and lightening. They want the ocean without the awful roar of its many waters…. Power concedes nothing without a demand. It never did and it never will.”

Now is the time to reorganize all anti-capitalist forces and fighters for working class emancipation and self-determination for people oppressed by capitalism for the rebuilding of a new revolutionary political organization to organize and build our combined power to overturn capitalism that is, in its death agony, waging war, famine, pestilence, and death, and the globalization of global warming throughout the world.

When we organize our power, we will have the force to stop the corporate thievery! Instead giving ‘bailout’ donations to these modern day robber barons we shall bailout the victims of the modern day Wall Street Robber Barons! — Not a cent to bail out the bankers!

Instead of the socialization of debt, we will expropriate and nationalize the entire banking system under the democratic control of capitalism’s victims, not its agents!

We can then force the ruling classes to open its books so we can determine what has been stolen, hidden in off shore accounts, or squandered at our expense! Make the banks, corporations and the ruling class pay the full price of the crisis — Not the poor and the working class.

Once we organize our power independent of the ruling class we can bring all the troops home now from Iraq, Afghanistan, and every other country where they’re stationed, and instead of spending trillions for war, we can initiate massive public works projects, to rebuild the nation’s inner cities, schools and hospitals and eliminate poverty and unemployment. We can also force a one hundred percent tax on the war industry profiteers!

What is needed is solidarity of the all exploited and oppressed. In the present world, the rights of the capitalists to make a profit are in direct conflict with our basic rights. In this sense, the capitalist system has become a threat to humanity. As the old union song Solidarity stated:

In our hands is placed a power greater than their hoarded gold;    Greater than the might of armies, magnified a thousand-fold. We can bring to birth a new world from the ashes of the old. Solidarity makes us strong.

Jefferson’s words, that human rights are unalienable, mean that these rights can never be superseded. At all points of conflict the rights of humanity to survive must supersede the right of the few to make a profit. The right to a free world is an unalienable human right!

Since the present crisis of capitalism is a global concern, it requires all of humanity to act collectively, in our overall interests for our survival as a species, to correct the problem and to remove the obstacle of capitalism. It requires a society where humanity has social, economic, and political control over the earth. Such a society, a socialist society, is needed to ensure that all decisions affecting the survival of our standard of living are under the democratic control of humankind so that the production of goods will be done for the needs and survival of humanity instead of the production and the destruction of humanity and other species for profit.

With these goals we can begin to build an effective movement. As we continue to organize against capitalism and its destructive course, we can and will transform the world.

The occupy movement is a reflection of the current changing mood in the world’s consciousness about capitalism and the need to take the power from the 1% and redistribute the world’s wealth on a democratic basis.