History Repeats Itself Again! From the Robber Barons of 1870 to Today! 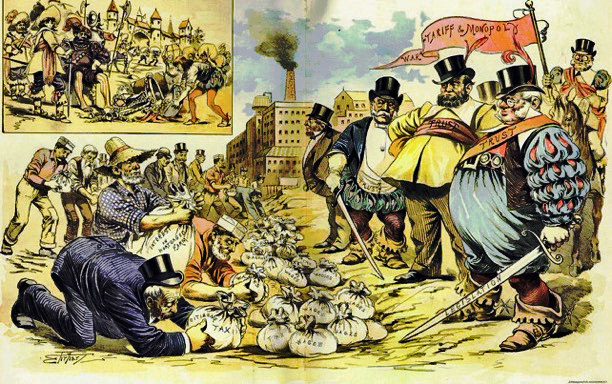 Originally, a “Robber Baron” was a noble who robbed travelers who passed through their lands.  in the latter part of the 19th century, this term was ascribed to  U.S. capitalists or industrialist considered to have become wealthy by exploiting  natural resources,corrupting legislators, or other unethical means.”

The energy monopolies were the foremost “Robber Barons”.  Their price gouging led to many government officials to demand statification of electricity.  A compromise was reached with the power companies to induce government regulation.  Since then, energy costs were relatively controlled, the creation of “public utilities” stemmed the tide for public power, which still, where it is in place, provides cheaper and more reliable electricity and gas than private investor owned utilities.

In 1996, in a unanimous bi-partisan vote by the California politicians, amply funded the the energy cartels, “deregulated” the power industry. This freed the energy cartels to revert to their natural “Robber Baron” instincts.  As the crisis has deepened, the governor and the legislature have worked out a scheme to give these robbers billions of dollars, partly with rate increases and tax dollar bailouts from the budget surplus and partly with borrowed money.  Those who are gouged the most, the working people of California, through taxes and rate increases, will pay out billions to the energy companies and more billions to the banks in interest costs.

The end result will be less public funds for schools, hospitals and other needed programs, because the money will have gone to the energy give-away.  So far, the power robber barons have reaped in more than $40 billion (and counting). in windfall profits.

After torturing the public with intermittent blackouts, the California Public Utilities Commission has approved a160% Increase in monthly utility bills to feed the insatiable drive for increased profits by the energy cartels.  Everyone in California knows there is no real power shortage.  The Los Angeles public     power companies and other public power companies have no shortage of power and lower rates for power.

The real reason for the rolling blackouts is that the energy companies are refusing to send power unless they can get what the traffic can bear!

It Is Times To Stop The Robber Barrons We Should Demand: