States and provinces that experienced the blackout; not all areas  within these political boundaries were affected.:Northeast blackout of 2003 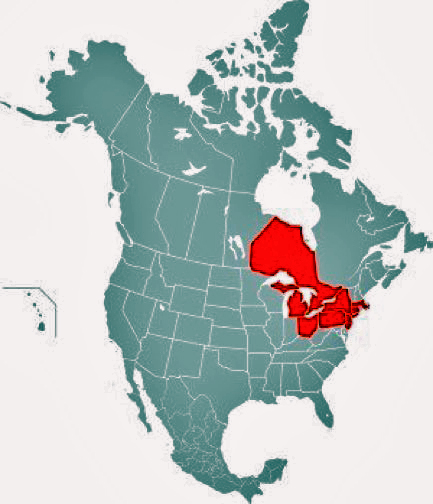 SAN FRANCISCO – On August 14, the northeastern United States experienced its most extensive power blackout ever. The cause, according to US President George Bush’s statement on August 15, was the “antiquated system”. He might have been referring to the power grid, but the description is apt for the profit-driven capitalist system.

Breakdowns in the power grid were followed by transmission line failures and successive power plant shutdowns, leading to a blackout that extended more than 23,000 square kilometres and disrupting the lives of more than 50 million people. It caused at least four deaths.

According to Harvey Wasserman, writing on the Free Press web site (<http://www.freepress.org>) on August 15: “This is the fourth – and worst – completely unnecessary major blackout of the north-east in 40 years, dating back to 1965. Its scope – from Detroit to Ottawa, New York and New Jersey – is absolutely awesome, especially since it’s due to total stupidity and corruption.”

That stupidity and corruption exist is probably true, but the power failure was caused by the lack of investment by the private electricity utilities in transmission-line maintenance and upgrading, and more broadly to deteriorating infrastructure.

Technicians have described an overloaded transmission system, which is badly in need of maintenance and new construction. In plain words, the grid has not been updated to deliver the power that is being produced.

In the US, most power utilities are owned by a small number of companies, which constitute a virtual monopoly. In the past, they have been regulated to one degree or another by the state governments, which controlled, to a certain degree, pricing, minimum investment in production and transmission capacity and the amount of power produced.

At the beginning of the 1900s, “regulation” (that also guaranteed) profits was the capitalists’ slogan in opposition to the demand by the then-mass Socialist Party that energy generation and supply be nationalised.

During the 1990s to the present, the meagre regulations that did exist came under constant attack by both major US capitalist parties, the Republicans and the Democrats. “Deregulation” (meaning laissez-faire capitalism) became the catch word.

It was sold to the public as “cost saving”. The theory was that local utilities, no longer producing their own power, could negotiate among competing suppliers for the best price and pass the savings on to the consumer. The reality is that the “suppliers” became parent corporations of the local utilities.

The first disaster of “deregulation” was the 2001 California “energy crisis”. Enron and other utility corporations, no longer regulated, fixed prices to inflate their profits and rob California of US$60 billion. A year later, one of these “robber barons”, Enron, filed for bankruptcy, after its bosses had stolen these windfall profits.

Through deregulation, the energy corporations gained ever greater control over both production and delivery of energy throughout the US. To boost their profits further, they did not spend the necessary amount of money for maintenance and new equipment. As a result, the US did not have power lines fully equipped to deliver sufficient electricity if there was a sudden demand.

Wasserman describes it as “an ancient electric grid that is obsolete if not obscene. It is a massively fragile Rube Goldberg device [Goldberg draws wacky cartoons which depict the most elaborate and ridiculous devices to accomplish the most mundane tasks] that dangerously and inefficiently carts around electricity from expensive, polluting and extremely unsafe central generating plants to buildings that waste massive amounts of energy and generate none. That the antiquated grid will crash again and again and yet again is absolutely certain.”

Such is the anarchy of capitalist production. Another “benefit” of deregulation has meant that nuclear power plants have become more profitable, as the price of energy has increased. This has meant the operation of nuclear power plants beyond their 40-year capacity. According to the Public Citizen organisation (<http://www.citizen.org>): “The US Nuclear Regulatory Commission, the federal agency charged with controlling the nuclear-power industry, is reevaluating the criteria it uses when considering applications for license extensions for reactors that have reached the end of the 40-year operating life allowed by their original permits. The NRC has processed 16 such license-renewal applications, and in all cases it allowed the plants’ corporate owners to run them for another 20 years.”

Other articles have pointed to these ancient power plants becoming ever increasing liabilities in the system and increasing the possibility of a catastrophic nuclear disaster. In fact, the breakdown of nuclear power plants in Ohio have been singled out as part of the cause of the August 14 blackout.

Once again, the proposed solution by Bush and other capitalist politicians is to organise a government bailout of the energy monopolies. The cost will be, at conservative estimates, $56 billion just for necessary repairs to the grid and to modernise equipment!

The need for regulation and control of the “energy business” by the majority of the population is becoming more apparent. The case for public ownership of energy makes more and more sense. Why should workers and consumers continue to be ripped off with higher prices, taxes and worse services? It is time we had energy to meet society’s needs and not for the profit of a tiny number of owners. The profits from energy could then be used to explore the use of alternative energies and eliminate the use of dangerous and polluting fossil fuels and nuclear power.

The North American blackout, the Enron scandal and the deregulation crisis are indicative of a far greater problem — the crisis of capitalism in the United States.