In his new book, Gore Vidal makes a scathing attack upon the bipartisan domestic and foreign policies of the US government.

The introduction to this book sets its theme, that the bombings of the Federal Building in Oklahoma City in 1995 and the World Trade Center (WTC) in New York City on September 11, were used, respectively, to justify the Anti-Terrorism Act of 1996 and the current “war on terrorism”.

Vidal explains that these bombings were in response to the more than 200 acts of war and (ongoing) worldwide military incursions by the US government since 1945, and the concurrent erosion of the Bill of Rights. Vidal refers to Newton’s theory “that for every action there is an equal and opposite reaction”.

Without condoning the attacks, Vidal explains that the bombing of the Federal Building in Oklahoma, by Timothy McVeigh, was a response to the ongoing attacks on the Bill of Rights, and that the WTC attack, allegedly organized by Osama bin Laden, was a response to US government foreign policy/terrorism.

Laura Gray’s cartoon from the page of The Militant August 18, 1945, under banner headline: “There Is No Peace,” The Only Victor: 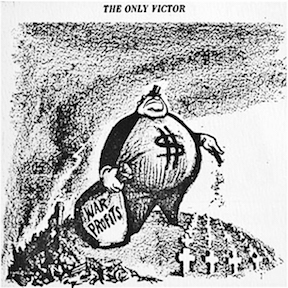 The absurdity of bombing Afghanistan, in retaliation for Osama bin Laden’s presence there, was curtly explained by Vidal in a November 24 interview with Reuters:

What Osama did is not a war. It can’t be a war because Osama is not a nation. He is a gang. It is like being hit by the Mafia. You don’t declare war on Sicily because the Mafia happen to live in Sicily. You don’t bomb Palermo. You get the international police and you track him down. (And you don’t arrest everyone in New York City who looks Italian.)

The following paragraphs exemplify Vidal’s concepts throughout the collection of essays.

. . . The damage caused by the September 11 plane bombings is] nothing compared to the knockout blow to our vanishing liberties — the Anti-Terrorism Act of 1996 combined with the recent requests to Congress for additional special powers to wiretap without judicial order; to deport lawful permanent residents, visitors, and undocumented immigrants without due process. . . .

. . . an undeclared war under the Clinton presidency which coincided with severe restrictions of our human rights supposedly protected by the Bill of Rights as the first ten amendments to the constitution.  . .The Bush administration (Vidal notes) though eerily inept in all but its principal task, which is to exempt the rich from taxes, has casually torn up most of the treaties to which civilized nations subscribe — like the Kyoto Accords or the nuclear missile agreement with Russia. The Bushites go about their relentless plundering of the Treasury and now, thanks to Osama, Social Security (a supposedly untouchable trust fund), which, like Lucky Strike Green, has gone to a war currently costing us $3 billion a month. They have also allowed the FBI and CIA either to run amok or not budge at all, rather like the Wizard of Oz doing his odd pretend-magic tricks while hoping not to be found out. Meanwhile, G.W. booms, ‘Either you are with us or you are with the terrorists’. That’s known as asking for it. . . .

In a Reuters interview, Vidal gives the following summation of his outlook:

One obvious fact is that the nation’s first unelected president, appointed by the US Supreme Court, has seized upon this event as well as the anthrax bio-attack to institute a far-reaching ‘anti-terrorist’ regime that for all practical purposes rips up the US Constitution and Bill of Rights so as to replace it with the caprice of executive fiat. “This in and of itself should be sufficient for some strong measure of alarm on the part of most Americans, one would think — if these were normal times. They are not normal times for precisely the opposite reason that the great master illusionists of our historical era would have us believe. The great master illusionists, the global corporate media empires, run by some of the wealthiest and most powerful individuals ever to have lived on this planet, would have us believe that the real dire deadly threat to our present safety and security comes from some shadowy group of terrorists that anyone with a high school education and even the most rudimentary computer skills could find out to have been created from the very ‘getgo’ by the very institutional power structure that now exploits the existence of these ‘terrorists’ as the reason for suspending the normal constitutional order and the use of extra-judicial measures (e.g., covert action) as the remedy for their Frankensteinian creation! How very convenient! The sadness, danger, and national disgrace of the present moment come not from the fact that this present crop of world class totalitarians come replete with jackboots and swastikas but rather that they don’t! Evil never wears a convenient label but more often than not portrays itself as an ‘angel of light’. That of course is what makes it evil because it is that which it pretends not to be or that which it claims, as in this case, to be fighting against. How is it then that humanity has survived in the face of this most monstrous of existential constructs? History, tradition, experience — or what Dostoyevsky referred to as ‘learning to live life through one’s stomach’ (aka guts!) — have taught us. It is this of course that is and always will be our ultimate and only source of salvation in whatever time or place we may find our sorry selves. Joy springs eternal from this happy fact!”

One of Vidal’s explanations of the forces behind the current policies of the US government is the consolidation of wealth through corporate mergers. One result from the “merger mania” of recent decades is the consolidation of the mass media (book publishing, broadcasting, newspapers, etc.) under the control of six giant multinational corporations.

One ominous side effect is that Gore Vidal, one of the most respected American authors in contemporary times, could not at first get his essays, on September 11, published in the United States. This book was only published in the US after it became a bestseller in Europe.

This book is well worth the reading. The major significance of the book is that, at a time when most writers and broadcasters are trembling in fear of their corporate leaders, an individual of the stature of Gore Vidal is speaking out against the policies of the US government.