Thousands of protesters took to the streets in New York City, shouting, “No justice, no peace!” AP Photo/Jason DeCrow 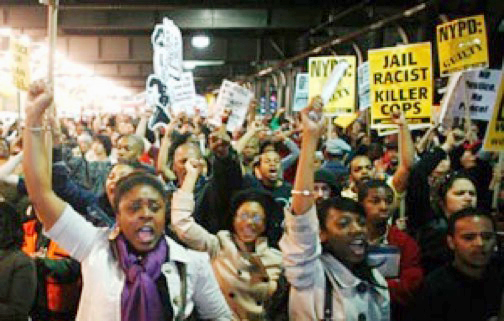 On February 25, four New York City police officers were acquitted of all charges in the death of Amadou Diallo, the immigrant from Guinea who was shot in a barrage of 41 bullets as he stood, unarmed, in the vestibule of his apartment building in the Bronx.

“I think there’s no justice,” Diallo’s father said bitterly after the verdict was read.

Thousands of people, protesting the verdict, took to the streets in New York City, shouting, “No justice, no peace!” and “Forty-one, forty-one, it’s a wallet, not a gun!”, referring to the cops’ testimony that they thought Amadou Diallo had a gun when he reached into his pocket to get his wallet and ID.

Seven of the jurors, speaking on NBC’s “Today” show, insisted that they had no choice but to acquit the cops, because of the law and evidence presented in court.

One juror, Lavette Freeman, said that she understood the anger expressed in the protests, but the prosecution had given her no basis on which to convict. “For me that hurts,” said Freeman, who is Black.

The chief prosecutor in the case, on the other hand, shifted blame for the acquittal to the judge. Many thought that the four-hour instructions Judge Teresi gave to the jury came down heavily on the side of the defense.

The New York Police Department announced that it would make its own investigation of the conduct of the four cops, but that this would take a year to complete. Police Chief Safir has said that the Street Crime Unit, while being maintained, will have various changes made in its operations.

These promised “reforms” are reminiscent of previous statements made by the NYPD. But there is an old saying that is relevant: “The more things change, the more they remain the same.”

This was made clear when a few days after the Diallo verdict, a young Black man, Malcolm Ferguson, was shot by a cop just two blocks from where Diallo had been killed. Ferguson’s mother claimed that her son had been “executed,” since he had recently filed notice that he intended to sue the police for $5 million for an incident in which cops had broken his hand and then held him for two days before he could get medical attention.

The exoneration of the New York cops who murdered Diallo is the latest example of the “legal lynchings” carried out by police forces throughout this country. The police scandal in Los Angeles, for example-in which cops were found to have framed, beaten, and even shot innocent people-seems to be widening by the minute.

Already some 40 criminal convictions have been overturned there as a result of initial investigations.     It was recently revealed that LAPD officers conspired with the Immigration and Naturalization Service to deport some 160 immigrants who had witnessed police brutality incidents or who the cops feared might contradict them in court.

Ever since Radical Reconstruction was overthrown in the decades following the Civil War, police violence has been a necessary institution of the ruling class to intimidate the Black minority and other oppressed minorities in this country.

Although, as a result of the civil rights movement of the 1960s, Jim Crow segregation is no longer legal in this country, we are witnessing a new drive of the ruling rich to make de facto Jim Crow the rule of the land. As the capitalist class and their Black and white politicians are leading a war on those in poverty, they are turning prisons and the welfare system (workfare) into institutions of forced labor (de facto slavery).

At the same time, this country’s rulers are systematically destroying affirmative action and reinstitutionalizing unequal opportunity for the Black masses. Police violence is necessary to this process of resubjugation of the Black community.

In order to stop this process, it is necessary to drop support to the two capitalist parties and to return to the mass action strategy of the civil rights movement in opposition to the government. Such a strategy could lead to Black control of the Black community and the end of the police state in that community.

The “Verdict” for Officer Mesherle There is no Justice in the United States! 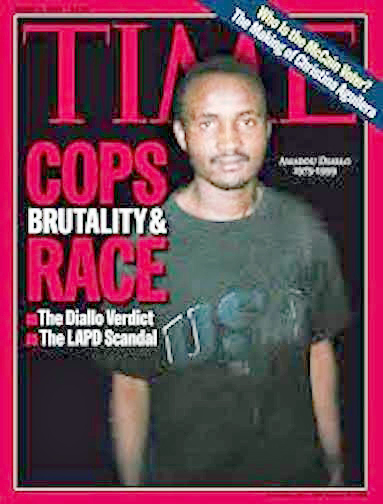 . . . They use the press to set up this police state, and they use the press to make the white public accept whatever they do to the dark-skinned public… They have all kinds of negative characteristics that they project to make the white public draw back, or to make the white public be apathetic when police-state-like methods are used in these areas to suppress the people’s honest and just struggle against discrimination and other forms of segregation. A good example of how they do it in New York: Last summer, when the Blacks were rioting—the riots, actually they weren’t riots in the first place; they were reactions against police brutality. And when the Afro-Americans reacted against the brutal measures that were executed against them by the police, the press all over the world projected them as rioters. When the store windows were broken in the Black community, immediately it was made to appear that this was being done not by people who were reacting over civil rights violations, but they gave the impression that these were hoodlums, vagrants, criminals. . . . — Malcolm X at the London School of Economics, Feb. 11, 1965 http://www.hartford-hwp.com/archives/45a/461.html

There has never been justice for Black people in the United States, who have always been victims of police brutality. See my essay The Historic Role of Police Brutality in the Black Community and African American Oppression.

The Police Originated from the first slave patrols in 1704, which first got established in the South and lasted until 1861. Their original role was to catch run away slaves.

Ever since that time, it the police have used police brutality to subjugate the Black Community. That has always been their primary role in the United States — even with an Afro-American President!

Years ago the Diallo Verdict Gave Police a License for ‘Legal Lynchings’.

The article blow from the San Francisco Bayview Newspaper, The Verdict” for Officer Mesherle is INVOLUNTARY MANSLAUGHTER, is written by the Oakland General Assembly for Justice for Oscar Grant.

Even though, when Bay Area Rapid Transit Police Officer shot Oscar Grant in cold blood as shown on many videos, the jury, that was purified of Black citizens, found Mesherle guilty for involuntary manslaughter — not murder or involuntary manslaughter. Similar to ex-cop Dan White getting off for the Murder of San Francisco Mayor George Moscone 30 years ago, because he had gotten a ‘sugar rush’ from eating a Twinkie!

To protest police injustice, the Oakland General Assembly for Justice, before the trial even began, as they stated in their article, “called for a community gathering on the day of the verdict, yet now city leaders have decided to hold their own verdict-related event on the same day at the same location starting one hour earlier. Their speakers will be city-approved only and will be given specific city-approved talking points, more focused on the possibility of property damage than justice for Oscar Grant or other victims of police violence. Thus undermining and usurping their right to assembly!

In a repeat of Harlem 1945, “When the store windows were broken in the Black community, immediately it was made to appear that this was being done not by people who were reacting over civil rights violations, but they gave the impression that these were hoodlums, vagrants, criminals.”

Who are the real criminals in the Black Community?

Malcolm X once stated “Wherever you have organized crime, that type of crime cannot exist other than with the consent of the police, the knowledge of the police and the cooperation of the police.”

Justice for Black people can not be had through the DA/Police/Court system. In order to put an end to police brutality and the concurrent crime in the Black Community, it is time for the community to begin to clean up the city make civil arrests of illegal cops and politicians! 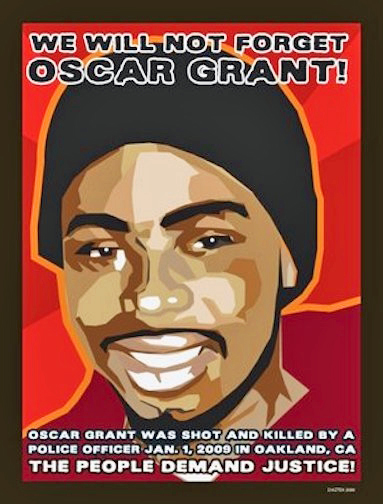 The verdict for Officer Mesherle is INVOLUNTARY MANSLAUGHTER. As the verdict approached, it came to our attention that numerous “leaders” and “organizations” in Oakland are speaking in the name of Oscar Grant with their own agenda and there has been conscious political sabotage on the Oakland Assembly’s organizing efforts. Due to this, we would like to voice such concerns publicly.

Before the trial even began, the Oakland Assembly called for a community gathering on the day of the verdict, yet now city leaders have decided to hold their own verdict-related event on the same day at the same location starting one hour earlier. Their speakers will be city-approved only and will be given specific city-approved talking points, more focused on the possibility of property damage than justice for Oscar Grant or other victims of police violence.

City Council member Jean Quan has stated that she speaks for Oscar Grant’s family, even though she has not sought approval from Oscar’s family to do so nor has she been seen doing any credible act to pursue justice concerning Oscar Grant’s murder. As our committee prepares to hold a two-hour rally in the intersection of 14th and Broadway on the day of the verdict, City Council member Desley Brooks has been taking an active lead in organizing a city-sponsored rally in front of City Hall as a political diversion against our rally.

City-linked nonprofit Urban Promise Movement released a talking point sheet geared toward “inoculating” Oakland youth against “outside agitators” as if Oakland’s youth of color do not possess their own political agency and thought. Youth Uprising released a public service announcement equating the murder of Oscar Grant with property destruction. Joe Haraburda, president and CEO of Oakland Metropolitan Chamber of Commerce, started an “Oscar Grant Memorial Fund” claiming to benefit youth in Oakland and “stand for justice” yet has not even contacted Oscar’s family about the fund.

Such efforts are political tricks for their own positive publicity. We have not found that such efforts as the Chamber of Commerce’s accumulation of money for Oscar Grant has helped the cause and the pursuit for justice concerning Oscar Grant’s murder in any way. The Oakland Metropolitan Chamber of Commerce works with Mayor Dellums, who has also been dragging his feet throughout the whole process of this case.

Along with Dellums’ passivity concerning Oscar Grant’s murder, Oakland Police Department, along with the Alameda County Sheriff’s Department, has spent over $700,000 on Long Range Acoustic Device (LRAD), a high-decibel acoustic device intended to keep the Oakland population in control, purchasing this weapon at a time Oakland is currently laying off school teachers.

The Oakland General Assembly for Justice for Oscar Grant seeks to organize for the justice in Oscar Grant’s murder through a democratic process that connects with the greater community beyond well-connected and often self-appointed “leaders.” We are not proponents of violence; we are proponents of justice. We have found that such justice is not created by the government’s own mechanisms; only through the people’s will and their political efforts can we see justice materialize.

The Oakland General Assembly for Justice for Oscar Grant is a grassroots coalition of concerned citizens working with statewide partners to stop the epidemic of police abuse. For more information, ro to their website.