Earth Day Editorial: Survival of the Human Species is Now at Stake!

In Its Death Agony, Capitalism Is Traveling About The World Like The Five Horsemen of  the Apocalypse, Spreading War, Famine, Pestilence, Environmental Destruction and Death.

After US The Flood! 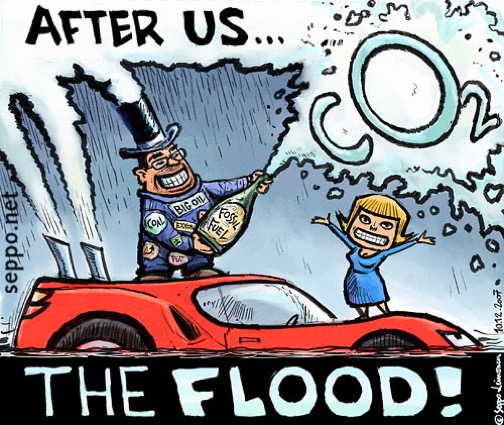 The media contends that we have made great progress, but, since the 1969 Santa Barbara spill of 80,000 -100,00 barrels of oil spill, we have progress to the 2010 Gulf of Mexico oil rig spill of 4,900,000 barrels. The size of the spills have gotten bigger and all ecological disasters have gotten more toxic to the evnvironment.

At first there was great hope that the EPA would set regulations to protect the environment.

In fact many such regulations became law, but the regulations have always included the concept of economic feasibility.

Economic feasibility means that the profitability of an economic enterprise cannot be subordinated to environmental needs. Therefore, environmental and safety laws, under capitalism, have always been a compromise between science and business.

Profits Take Priority Over the Survival of the Human Species

Since deregulation, in every environmental catastrophe the thirst for profits has accelerated, as regulations have gotten worse, environmental destruction, pestilence, and death of the world have become everyday news.

The most glaring example is the occupational environment, where workplaces have become killing fields. (See my essay The War at the Point of Production: The Killing Fields of the United States.)

According to Lisa Cullen, on page 2 in her book, A Job To Die For:

Every day, 165 Americans die from occupational diseases and 18 more die from a work related injury. On the same day, more than 36,400 non-fatal injuries and 3,200 illnesses will occur in America’s workplaces.” Every year 60,225 Americans die from occupational diseases while 6,570 more die from work-related injuries. In that same year, more than 13,286,000 non-fatal injuries and 1,168,000 illnesses occur in America’s workplaces. Again: “Each year, this unknown workplace epidemic extends into nearby communities to claim the lives of 218 innocent bystanders and injure another 68,000.

In fact, some estimates are higher!

Blue-collar workers and agricultural workers all have higher rates of cancer and other diseases because they receive higher doses of the toxic chemicals at the workplace than the rest of the population. Eventually, these toxins spread to the entire working class as they become part of the environment.

Scientific technology exists to prevent the high rate of occupational diseases, but the profit motive and capitalist competition prevent the implementation of preventive action and proper safety precautions.

As global warming continues at a faster and faster rate the North and South ice is melting.

It is becoming clear that the struggle for the environment is a fight for human rights and the survival of the species — a struggle for environmental justice. We need to defend, in the words of Thomas Jefferson, humanity’s Unalienable Rights to Life, Liberty, and the Pursuit of Happiness.”

We should demand that:

Science and technology are not an obstacle to maintaining a safe environment. The barrier to a safe environment is capitalism and its paramount principle of production and science for profit. Most environmental studies demonstrate that environmental destruction has become globally intertwined within our society and that the globalization of capitalism has quickened the destruction of the planet. Under the conditions of global capitalist competition, it is not economically feasible to invest the capital necessary to reverse this destruction.

In the present world, the rights of the capitalists or the 1% to make a profit are in direct conflict the 99%’s basic rights. In this sense, the capitalist system has become a threat to humanity as a species.

Jefferson’s words, from the Declaration of Independence, that human rights are unalienable, mean that these rights can never be superseded. At all points of conflict the rights of humanity to survive must supersede the right of the few to make a profit. The right to a safe environment is an unalienable human right!

Since environmental illness and destruction are a global concern, it requires all of humanity to act collectively, in our overall interests for our survival as a species, to correct the problem and to remove the obstacle of capitalism. It requires a society where humanity has social, economic, and political control over the entire environment. Such a society, a socialist society, is needed to ensure that all decisions affecting the environment are under the democratic control of humankind so that the production of goods will be done for the needs and survival of humanity instead of the production and the destruction of humanity and other species for profit.

As Fidel Castro, in his speech to the Earth Summit in Rio De Janeiro in 1992 stated, fifteen years “Tomorrow it will be too late to do what we should have done a long time ago.”